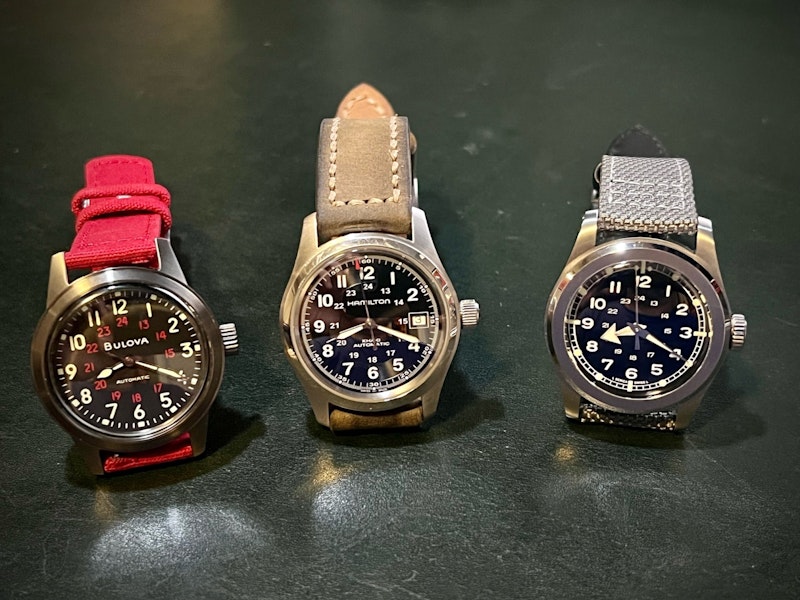 A field watch, in theory, should be a simple, accurate, but tough watch with military roots. I have always been drawn to this style of watch and many of us start out with something like a Hamilton Khaki. I will not do a deep dive into all of these for brevity's sake, but will highlight the newest addition.

<Apologies for all phone pics, too lazy to break out the DSLR and edit>

Recently, I stumbled on the Bulova Hack. I already knew it was likely not a great watch, technically speaking, but it was black and red, and as a Star Wars fan, that's my favorite colorway, put it in a 38mm field watch and now you have my attention. After a little browsing, put a bid on eBay for $130 which won a new watch.  Outside of a G-Shock, it became the cheapest watch in the collection.

The watch came with a strap of unknown animal origins, so I threw a slightly better, but still inexpensive, Barton red canvas strap on it. Pulling the crown immediately results in the second hand moving back about five seconds. Top quality here. That said, on the timegrapher it averages +4 seconds a day, not horrible for a Miyota 82S0. I question how long it will hold up with that.  No screw-down crown, minimal water resistance (30mm), and 18mm lug width. However, for very little money you can get a heck of a watch.

This remains one of my favorite beater watches and one I tend to grab often. After many years it remains accurate and one of the most comfortable watches I own at any price point.

To me, the dimensions are perfect, 38mm, 47mm L2L, 20mm lugs,  9.5mm thick, simply awesome. Throw in an 80 hour power reserve and one really cannot ask for more in watch one can get usually around $350. 100m water resistance feels right for a field watch.

The fit and finish of the Serica is a level up from the Hamilton and one I enjoy looking at a lot more than many others on the list. The included Bonklip bracelet does nothing for me.

The Local (kind of)

Really enjoyed the early podcasts with Cameron Weiss and Matt Farah and I made a point to keep an eye on his work. This one is a little larger than I prefer (42mm, 47.9 L2L, 20mm lugs, 12.9mm thick), but it is a case where dimensions on paper are different on wrist. 6497 mechanical ETA base redone by Weiss, it remains a heck of a value (often going for less than $1000 used). No lume is a major bummer here though.

Speaking of large watches, the Rolex Explorer II Polar (216570).The second Rolex I purchased and quite possibly the coolest. Yes, it is 42mm, but somehow feels smaller than the Weiss.  I'd love to say I have hiked Everest with this, but nope.

And a side by side of all:

Over all that is a satisfied display like the variety all those field watches. That bulova very impress and the cherry on the top ( ROLEX)!!!

Over all that is a satisfied display like the variety all those field watches. That bulova very impress and the cherry on the top ( ROLEX)!!!

If someone can get over the movement in the Bulova, it is a hell of a deal, especially if you can grab a deal on ebay. I think they are about $200 on Joma.

Hamilton, if you'll pardon my French, sh*t the bed by putting a date on a field watch. Otherwise, I'd own one.

my next pirchase will be a CWC G10. It doesn’t get more authentic than a real military issued watch.

just saw that they released an auto version (G22)

A little un orthodox but I do love my Defender II.

I have the Hammy field in the same configuration, black dial and red tip on the seconds hand, one of my personal favourites in my collection of field watches. The Bulova I had but let go, there was just something about the movement that annoyed me, otherwise a great little watch and at a price of $199 AUD brand new on sale from Starbuy located in Sydney, their an absolute bargain.

I like the variety of Bulova line up as well, not just one to choose from and two in particular have some fine details etched into the case back, which is a nice touch.

One I may suggest is my German Aristo Officers 38mm. Spec's are 38mm in diameter, 44mm lug to lug, 9.5mm thick and comes on a very nice Bund strap, not pictured here. 50m water resistance which is okay for me, no date on the dial which is even better, just a plain and simple watch that fits great and keeps great time. It's no Rolex though 🤣

A little un orthodox but I do love my Defender II.

The Defender is a good looking watch.

Very nice collection! Something for everyone at all price points. Just wondering but where will the field watch collection go from here? Also, are there any grail field watches that you might be coveting?

That's a really cool collection. That Bulova is worth looking into! I like my SNK807 but I wouldn't get another field watch in addition to it, I really like my timers of some kind. Nice pen collection too!

Very nice collection! Something for everyone at all price points. Just wondering but where will the field watch collection go from here? Also, are there any grail field watches that you might be coveting?

I say this knowing I’ll jinx myself, but nothing at the moment. Focused more on dress watches, but I tend to be an opportunity buyer at times, so I’ll never say never.

That's a really cool collection. That Bulova is worth looking into! I like my SNK807 but I wouldn't get another field watch in addition to it, I really like my timers of some kind. Nice pen collection too!

Thanks! for the short money, it’s hard to argue against the Bulova.

Is the Explorer II really a field watch in your estimation? The Explorer I definitely is, but the II has it’s roots in spelunking of all things and after the addition of a jumping hour hand it became more of a traveler’s and explorer’s watch I thought.

As a field watch admirer my gripe with many so called field watches is their lack of significant water resistance. If a watch is billed as made for rough duty it should really handle use in the water as well don’t you think? I get that the original dirty dozen watches were made during a time when good WR was not really feasible, but there is little excuse today for putting out a field watch with 30m or 50m WR.

The best field watch is a G-shock. No water worries, has a chrono for measuring distance with sound and the only drawback is the lack of an hour hand to find true north navigating. Although with time and sun position you really don't need that. Old school field watches were sub 36mm with only the hour numbers and worn by officers who never went near the water or dirt.