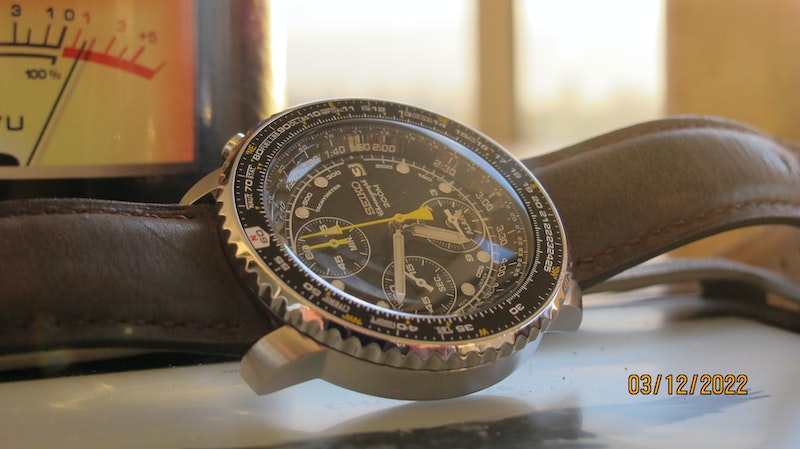 Wearing the SNA411 this morning made me realize two things. The first was that when I started collecting watches I thought that chronos were the bee's knees but I ended up with only three in a 20+ collection, and I never wear one of them.

The second led to the first: there are not a lot of small chronographs. Most of them are around 42mm and I prefer to wear sub 40mm on my 16.5cm wrist. At 42mm diameter, the SNA411 is not small and yet it's one of smallest looking watch that I own due to absurdly short L2L, compact case and dial design.

The other chronograph that I wear is the 39mm Dan Henry 1962 Racing chronograph. There's simply not a lot of options around and most of them are quartz or meca as the mechanicals tend to be larger and much thicker. The SNA411 is even more of a rarity once taking into account its relatively smooth chrono hand and the lack of  the "WTF it's doing here again" useless 24Hr indicator, having instead an alarm/second time zone register.

I guess that I could get one of the many Seagull ST19 based mechanical chronos, they tend to be on the smaller scale at 38-40mm and affordable, unfortunately they also have the potential of serious reliability issues due to the variability of quality. Other mechanical models I checked were either too large, too thick or no longer sold (Farer Bernina for example).

But in the end I don't care enough to invest time and effort into looking at expanding my chronograph collection. I found other type of watches that I like and are available in smaller sizes and the Flightmaster is more than good enough when I want to strap a busy dial on my wrist.

However, I'm also honest enough to admit that I'm willing to listen if one of you has a suggestion for a nice looking chrono, without a 24hr indicator, that is also small enough to be worn on a slimmer wrist.

Nice, I forgot about them.

Im saving up to add the 38mm maen skymaster to my collection but "its coming soon" on their website and I cant find anyone selling second hand online.. so, just have to be patient...

It's certainly a good looking watch and I loved the short lugs.

Just be very gentle when twisting the pusher locks because they will get stuck permanently.

I also found that before that they never stayed in the locked or unlocked position. They changed randomly which caused anxiety about keeping it waterproof.

I find that a timer is really useful to me but on this watch I found it hard to see exactly which minute the minutes subdial was showing.

So I just moved to ana-digi and then I gained clarity, a countdown timer, perpetual day-date and alarms all of which I use daily. And a world time which is very useful when I'm working with someone abroad.

- At the cost of not looking like a vintage watch anymore. I mean it's fine but just has a square screen that doesn't blend in.

And still the same lug to lug as the Seiko.

There are options in the sub-40mm #chronograph space. My collection contains three possibilities:

As someone who has suffered from slight wrists his entire adult life, I often have to think twice about sizes, generally anything over 40mn and I'm out (with one or two exceptions like the #flightmaster, and I am also partial to the SSC015, I think Seiko actually makes large chronographs that wear like smaller ones!)

Unfortunately for the SCC it was saddled by Seiko with the useless 24Hr indicator, which is already a show stopper for me. The other issue that I have with the SCC is best explained by this:

Unless I'm mistaken it's a 7T62 movement identical to the one in my Flightmaster.

I generally agree with you here, but ultimately my love of fidgeting with pushers and timing my * insert literally anything here * has pushed me to wear the bigger, thicker watches. And I've come to the realization that I actually quite enjoy the heft and CAN pull them off better than I told myself I could.

As for recommendations, vintage is always a goldmine for smaller watches -- but I desperately await the return of smaller chronos. Give me an upper 30 something mm mechanical chrono with a half decent bracelet that doesn't look like a daytona and I'm sold.

Im saving up to add the 38mm maen skymaster to my collection but "its coming soon" on their website and I cant find anyone selling second hand online.. so, just have to be patient...

The 'Thunder Gray' colorway on their site really caught my eye, but not a fan of the traffic cone orange hands 😂

What model/reference is this? Looks very interesting. And I love meca quartz!

What model/reference is this? Looks very interesting. And I love meca quartz!

Its a SNA139. Unfortunately, its only available pre-owned

Unless I'm mistaken it's a 7T62 movement identical to the one in my Flightmaster.

OK, then it's a pure quartz movement and the chrono, despite ticking at 1/5 of a second isn't a mechanical module like on a VK meca-quartz.

I have a Hamilton Linwood chronograph that I quite like. It’s 38mm. It does have a 19mm lug width, but I have been satisfied with its OEM strap.