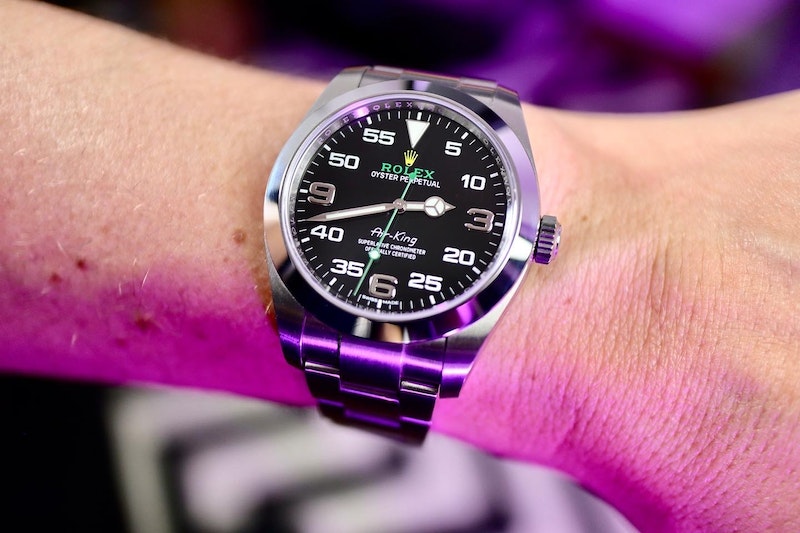 So the Rolex AirKing has had a facelift and engine replace !! But is it better!? I’m fortunate enough to currently have a now discontinued model to review for next week and I’ll try to answer that question! Before though! What’s your thoughts?

Personally, I would have to seen it completely overhauled.  I know they made a number of changes but none of them were significant enough to move the needle for me.

I think if you liked the old AK you’ll probably be really happy about the changes.  But, if it’s a model that you didn’t care for before then the changes won’t convert you.

I own the current Air King and I love the dial so much, but it is to thick. This my biggest complaint and with new case it will wear “normal”. I will switch in summer to the new version. At the moment I wear it on a Rubber B.

there is nothing wrong with it - you love it go for it - but for me, the numbers are so crowded and there is so many 5’s - not sure why they didn’t have the size of the numbers relate better with each other - but that is just my opinion

New one is a minor improvement over the old one, but neither are for me. It looks like a hodge-podge of spare parts still to me. I was hoping that they would return the Air King to being an OP with an Explorer dial like it used to be, or even making it the new Turn-O-Graph Datejust. Either would be better options, in my opinion. No offense if you have one of the newer Air Kings and love it.

I’d take an un-updated Milgauss over the new Air King 10 times out of 10 if an AD called me. The Milgauss is funky, but it looks intentionally designed that way.

For me personally, the Airking back in the day looked like a glorified OP and the more modern designs look like a very busy Explorer. Neither of these styles catch my eye, so I'm not sure a redesigned case with crown guards and changing the Arabic numerals from "5" to "05" is really going to change my opinion.

But if this is what you like, then go for it!

Was a fan of the A-K for many years. Especially with engine turned bezel. But these last two reissues, they are total disconnects from the A-K's heritage. Not for me.

The new one for sure! i could never get the old one being a pilots watch with only the triangle lumed… the design ethos was so odd…

Both the last and current Air Kings are rather confused styles.  Things like making the case thinner are welcome but the dial is just a mess.  Until a more comprehensive restyle, potentially going back to the heritage style, this will always be the oddity in the range (IMHO)

I love the now discontinued version! This and the Milgauss are two Rolex watches that do not look like the standard Rolex. I personaly love the odd mix of minutes and hour markers, the white gold 3,6,9 add a bit of contrast to the printed minute markers. The green second hand adds the touch of color to bring the whole thing together. Like I said I love it!

I have strong feelings about the Air King.

First, I strongly disliked the previous version for all of the usual reasons: asymmetrical dial because of the "5," too thick, outdated technology with the Faraday cage, etc.

Before last week, my thought was that they should return to the version from the 2000s (picture attached), but with a modern update. Keep that amazing engine-turned bezel (why has Rolex completely abandoned that?), but update the size. The old version was a 34mm, which is too small for modern tastes, so bump it up to 39mm (to replace the now-discontinued 39mm OP). Make the dials available in classy, refined colors (black, blue, and silver), while reserving the OPs for "fun" colors (like green, coral red, Tiffany blue, yellow, etc.). I think that would be a huge hit, would fill in a need at the 39mm size, and would differentiate it from the OP line.

Alas, Rolex did not listen to me (again). That said, I do like the update. It corrects most of the prior problems. The dial now looks more symmetrical and less erratic since the 3-6-9 better match the other numbers. And although I haven't seen it in the metal, I assume the thinner case will make a big difference. The crown guards also work. So, it's growing on me. For the first time in a long time, I would consider adding it to the collection.

I have always liked the Air King but i really like it now with the crown guards so i might put my name down !

Wow just looking at it. Look man enjoy it as it is and never ever look back its a Rolex keepers for life.

I love Watches, all sports with a round ball! Tennis coach by day! The Mad Watch Collector on the weekends!;)