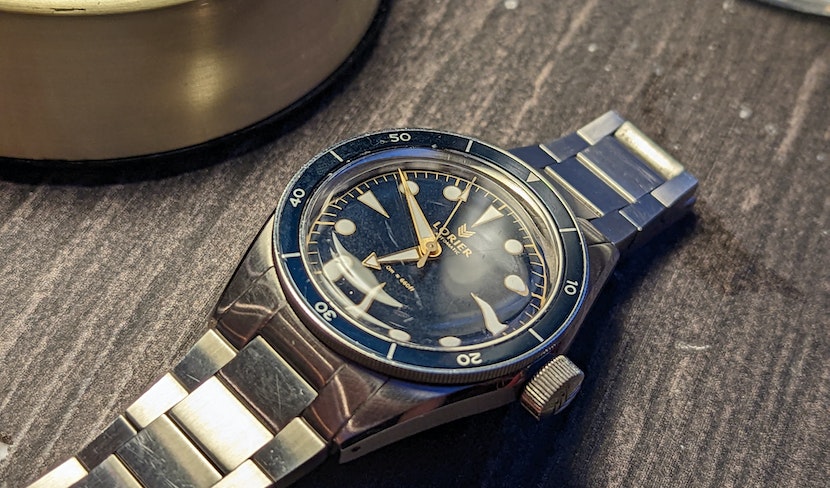 I used to believe in the perfect watch. A go anywhere, do anything timepiece that was equal parts tool, friend, fashion statement and fun accessory. I used to think it was my Panerai, whose battle-scarred plexiglass face told more stories than my mouth ever could. A timepiece that devoured straps like they were going out of style.

For years I had this belief, watching the rest of my collection gather dust in my drawer. And then, I started looking elsewhere to scratch that itch. Roughly 52mm with the crown never got old, until I opened my eyes to what 40mm looked, and felt like on the wrist. Until I saw how good a 39mm piece wore, or how 36mm seemed to just become one with the wearer.

And so, the desire for a more diverse collection began, and I laughed at the idea of a GADA piece. The PAM 372 got less wrist time in lieu of smaller, more water-resistant items. Dress watches that served a singular purpose, shiny gold pieces that at one point, I couldn't care less about.

During my journey as a collector, I felt the need to have a watch for every occasion, until I saw the Lorier Neptune. Then it quickly became the act of an itch that needed three watches to scratch.  The Neptune seemed out of reach, but one or two similarly designed pieces would make up for it, right?

I was always browsing forums, eBay listings and the occasional Chrono24 post about one for sale, but I could never come across the Blue Gilt. The summit watch that all other pieces I picked up were compared to.

For me, some things are constant. Death, taxes. Change. The Lorier Neptune.

The ever-elusive microbrand watch that I never could get my hands on. A return, to my go anywhere do anything piece. They say you should never meet your heroes, and boy do I wish I had met this one sooner.

How does it wear? Like it's not even there most times.  With a case width of 39mm and 47mm lug-to-lug, it plops itself nicely on top of my wrist like the Panerai. Though with a thickness including the crystal of 12.7 mm, it underscores the heavier Italian, which sits at nearly 17mm upon my wrist. I know, not a fair comparison but aside from my Seiko Bellmatic, it was the fairest comparison I had at the time.

The bracelet, good lord that bracelet. Lorier could have just included screw-in links and I would have been happy with that. They went above and beyond with fully articulated steel links that flex all over the place, solid end links that mesh perfectly with the case, and a lovely clasp that ties it all together. Flat links that have a smooth brushed finish to it.

Brushing that sends light back at me courtesy of same-day shipping. Colors surrounding me are shown in the bracelet like a cloudy mirror, and only the nicely chamfered edges of the case, and the polished signed crown are reflective.  The double-pusher clasp also has chamfered polished edged, and upon closer inspection…is debossed with the Lorier logo, a touch I didn’t notice until I started writing this very sentence.

Despite the flexibility of the links, I find there are no issues with perceived, or actual quality. I find jubilee bracelets to be cheap feeling, and this one is more akin to the Oyster design. Solid through and through, and doesn’t make a fuss when on the wrist. Massive kudos to Lorier for the quality, I can run my finger across the lugs and over the solid end links, and it feels like a single piece of machined metal. The lovely clasp engages and folds with a nice click and doesn't make so much as a peep upon my fat wrist.

It packs a Miyota 90S5, the no-date version of the lovely 9015. Its ball-bearing rotor is indeed quite a noisy one, and by god do I love it. I hear the thing rustling about when my hands fumble or do stuff.  It jitters and jingles and I can feel it shaking on my wrist sometimes, and it’s one of the only non-visual reminders of the watch.

Accuracy appears to be on the faster side at roughly +15 seconds a day, which is well within Miyota’s published tolerances. A cheap regulation would polish things up nicely. I'm sure they're using factory finishing and that's okay, this watch doesn't have a transparent case-back.

What it does have, is an exercise in taste and restraint. A nicely brushed screw-in case back with the Lorier chevrons dancing around the perimeter is all they saw fit, and it's all I see fit as well.

How is it to handle? Quite nice! The bezel with its polished coin edge feels and looks like a fresh half dollar coin. Initially the rotations felt cheap, or off to me, but the bezel uses what feels like a pair of off-tempo clicks that each need different twisting. Turn the bezel and it rotates smoothly and nicely with no backlash whatsoever. Do it slowly, and you can feel different styles of clicking inside the case, and I like this. One seems to have more cushion than the other but it's right, tight and true. Zero issues with alignment.

The crown itself is a dream to operate, with smoothly engaging threads upon screwing down the finger-friendly unit. That's what the crown feels like, a unit, and it makes me wish that all 39mm divers had a crown this big and bold.

Pulling out the crown is really quite nice. It feels almost hydraulically assisted, with a smooth oily slide, and a satisfying thump once I can set the time. The movement hacks which is a nice little feature, commensurate of this price point in my opinion.

Like all of my itches were scratched at once. That Seamaster 300 no longer leaves me yearning for its lollipop seconds hand, and the beautiful aluminum bezel plays all sorts of specular tricks on me. That Blancpain Bathyscaphe hasn't crossed my mind once, and while it isn't all too fair to compare watches leagues apart, the Neptune just ticked all of the visual boxes for me.

That bezel has a lovely shine to it, adding a three-piece-esque dimension to it when viewed from the side. The acrylic crystal is one of the stars of the show and adds depths, color and life to all angles of the watch. The blue dial and bezel don't appear black in low-light conditions.

I hold my breath as the Plexiglas sends me diving from a lighter shade of midnight blue, only to pull me under the surface into the twilight zone of rich blues, off violets and a ray of sunlight from the gilded hands. Godrays remind me to focus on the road and stop looking at my wrist.  Even the brushed rehaut adds a pleasing element to the eyes, and is smaller than previous iterations.

Why doesn't everyone use BGW9? It's a lovely aquamarine with a slow decay and truly fantastic dwell time. Not even my Panerai is this bright in the morning. My phone sits on the nightstand, as I merely need to check the Neptune for time. In the blackness of night, 12 applied indices and a single bezel pip tell me all I need to know.

What Would I Change?

Lorier is of the evolution, not revolution mindset. How many times can the dive watch be interpreted?  Seemingly infinite. Every iteration of the Neptune brings to the table more refinement, and smaller changes that make the big picture even bigger. I would have liked to see the words “Neptune” in red or white font on the dial for a small pop of color, but they have thought of that with the Gen IV Date option.  A fully lumed bezel would be nice but again, Lorier has done that with the new kids on the block.  Applied indices are my preference but hardly a dealbreaker for me, as I’m already drowning in the beautiful colors of that dial.

Other than that I couldn’t really think of much else I would change.

Not much. The crown logo doesn’t sit perfectly straight up when screwed in, but who cares.  The box that it comes with is finicky to open but who cares.  The strap sits too far from the case but who cares, Lorier already addressed it with the new model, AND I find it easier to swap them out this way.

Sometimes, this watch feels like an exit watch to me, and that’s okay.  Realistically I know my collecting journey is far from over but it is looking like a long nap, now that this piece is forever with me. Sincerely, I’d happily relinquish most of my collection to keep this thing.  I don’t even dive, so what is the Lorier Neptune to me?

It’s my introduction to microbrands, and a total overhaul of how I view the industry as a whole.  How a husband and wife team roughly an hour from my house turned my collecting world upside-down is beside me.  What this watch is, is everything I ever wanted from a modern timepiece. My holy grail. My once in a blue moon.

When you're top complaint is something about the box the watch came in, you've found a winner.

You were not joking when you commented that this is a love letter more than a review, well done!

You were not joking when you commented that this is a love letter more than a review, well done!

What didn't miss is your story about the acquisition & love story of this watch. I'm seriously tempted to get one for myself, just based on your post.

Mazel tov! May you have a long & happy honeymoon with it.

What didn't miss is your story about the acquisition & love story of this watch. I'm seriously tempted to get one for myself, just based on your post.

Mazel tov! May you have a long & happy honeymoon with it.

Thank you! You as well! I think it's my favorite piece in my collection and I can't see it being knocked down anytime soon.

Really great review on a great watch. I am a big fan of a Lorier, and have just managed to pick up a navy and gilt model on eBay and now excitedly waiting for delivery.

Really great review on a great watch. I am a big fan of a Lorier, and have just managed to pick up a navy and gilt model on eBay and now excitedly waiting for delivery.

Be sure to show us pictures when you get it!

Be sure to show us pictures when you get it!

It has arrived, what a beautiful watch indeed.

It has arrived, what a beautiful watch indeed.

Looks even better on someone else's wrist. That makes two Matts now with a Blue Gilt.

I'm a flight instructor with a healthy obsession with watches of all shapes and prices.

Jewbaka · 1 day ago
Thoughts on the Baltic Tricompax?

Jewbaka · 4 days ago
Let your friend lug it around!