It’s Always Darkest Before the Dawn 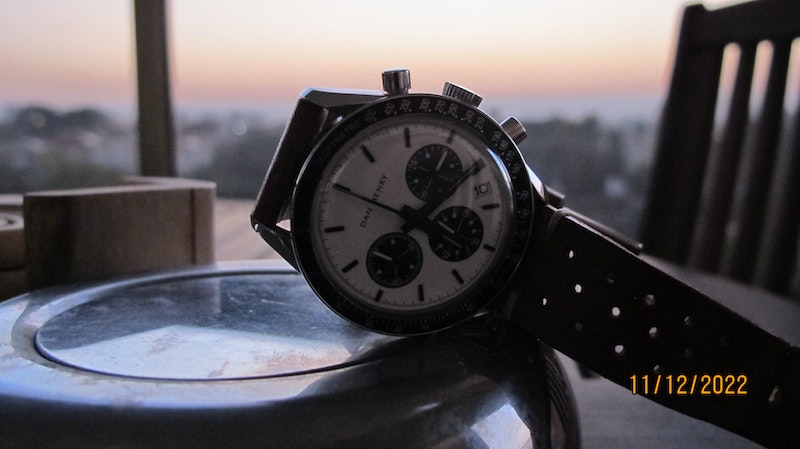 I have no idea when or where this idiom came into the English language, but what I know with certainty is that its originator was an idiot. It's cold before dawn, period.

I decided today on wearing the Dan Henry 1962 Racing chronograph because, well maybe because I felt like wearing a white dial watch again, or maybe because my need to complain again about the useless 24 hour indicator got the better of me.

Anyway, it was cold outside and I found that my fingers were too numb to set the date, so yes, I know that we are Sunday the 11th and I did manage to set the date once I warmed my hands around the coffee cup. Cleaning the camera's lens and the watch crystal was another story and it's very possible that I left more smudges than there were before my attempt.

Looking at the photos I'm not surprised to see that the camera sensor on my modern cell phone is better at catching light than the one on the canon G12, but I was not ready to see how vast was the difference. The close up shots with the G12 looks dark and grainy while the one from the cell phone looks like it was taken in full daylight. None of them were post processed  or retouched and they appear on screen just the way I shot them. On the other hand, there might be some processing done behind the scenes of the cell phone because the photo looks a bit artificial.

On the other hand, that one above looks pretty much like how it was in front of me, the light from the rising sun did give a slightly red hue to the otherwise white dial and this was captured faithfully by the G12, so perhaps the Canon isn't as outdated as I thought it was.

The racing strap from ColaReb is still my preference for this watch, it just looks right for the period the 1962 Racing Chronograph is homaging, the time when drivers timed their races from the steering wheels.

I gave away my old Olympus camera and just use my cheap Samsung phone now.

I love your daily posts. But your morning is my evening so I might just be drunk. 🍷😄

I gave away my old Olympus camera and just use my cheap Samsung phone now.

I love your daily posts. But your morning is my evening so I might just be drunk. 🍷😄

I'll probably keep using my Canon because I'm comfortable using it and because my interest in photography is simply too low to justify buying a new dedicated camera when the one in the cell phone is good enough.

Catskinner · 4 hrs ago
Kickstarting the day with a Kickstarter Yema