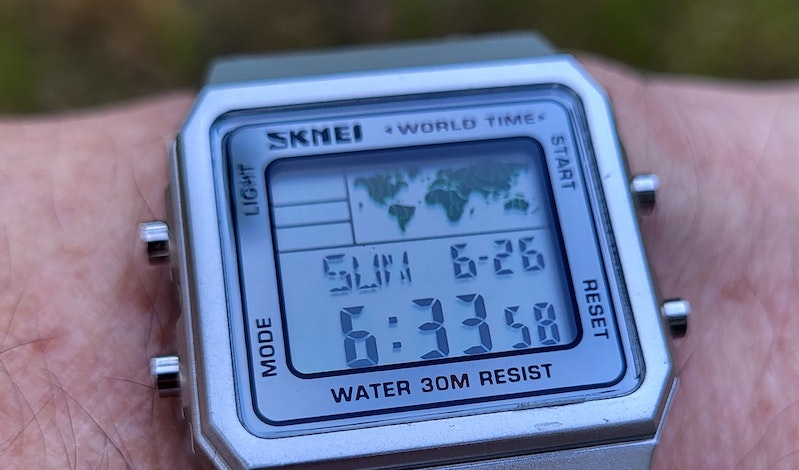 Budget Homage of a Budget Watch? The Skmei World Time

I have been curious about Skmei for a while now, as I have heard their watches described as the budget homages of Casio budget watches. So, I ordered several watches from Skmei on AliExpress. This World Time homage was the first to arrive.

The watch looks good and has the same display layout as a Casio A500. However, the keeper on the bracelet broke while I was adjusting the size and I had to replace it with a strap. Also, the stopwatch was running when I received the watch, and it would not reset initially. I did manage to get it to reset, but I think there is a problem with that pusher. I had to push it hard to get the stopwatch to reset.

The first thing I noticed about it after putting it on is how damned thick this watch is! 15mm is way too thick for a digital watch; that is as thick as a large number of 200M diver’s watches.

The other thing that was initially brought to my attention is how hard I had to push a couple of the buttons to actually get them to work.

On the plus side, the El backlight is pretty much as good as Casio’s Illuminator EL, and the display of the Skmei World Time is also the same as the display on the Casio, at least from what I see in pictures. I don’t have a Casio A500, but I do have an AE1200, which I am using to compare functions, as it has the same functions as the A500. The only real differences are the single alarm rather than five daily alarms for the Skmei, and the lack of an auto-calendar. Other than that, the functions are similar between the two World Time watches.

The finishing on the Skmei is much worse than on any of my Casio watches and reflects the lower production costs of this watch. Corners are going to have to be cut to produce a budget homage of a budget watch. While this watch does have its problems, for less than $12, it is hard to go wrong. If you are looking for a much less expensive alternative to the Casio A500 and don’t mind the few flaws, the Skmei World Time is an acceptable option.

Budget Homage of a Budget Watch? The Skmei World Time

You have been very generous to this watch.

You have been very generous to this watch.

I really think it's not horrible, just meh, but I will admit the price does make it more appealing to me. 😂

i would prefer casio all day 😂. fyi skmei is very popular in my country, there are many "non"watch enthusiast wearing it since its cheap

Currently have a Skmei on order, just as a brand tester. I have been suspicious of their QC for a while, case in point is the spelling of "solar" as "sloar" on one of their models.

I have a gold Skmei because it says "El Luminous" on the face. I like wearing that funny thing.

Candide3693 · 5 days ago
Had to Get an Armitron Tetra for My Digital Collection!