A (dim) light in the dark 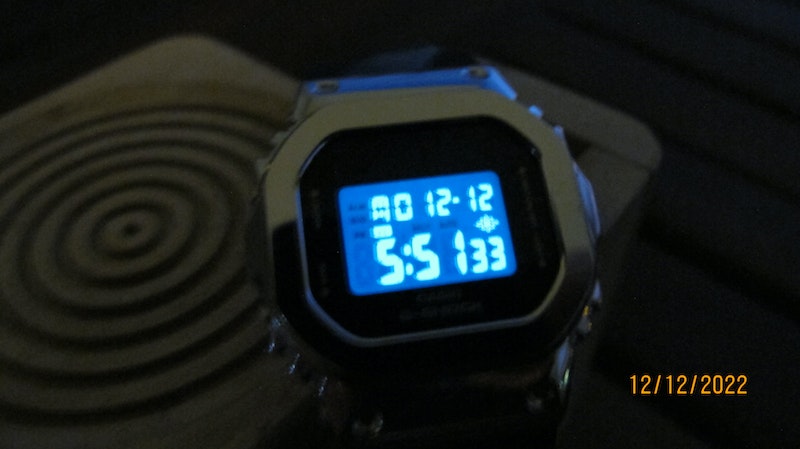 This morning was a complete bust as far as photography is concerned, because getting a clear photo of the GM-S5600 proved to be impossible. I decided to benefit from the 12th of December, one of the few days in the year when the US date format doesn't annoy me, to take the opportunity and shoot some photos of the smudge & scratch magnet (aka the GM-S5600). I was so wrong.

Lets start with the strap, the stiff plastic act as a spring loaded shock absorber and it's therefore impossible to get the GM-S5600 to lay flat on the table.

Then there is the unfortunate fixed and short time of illumination which made me rush to catch the glow of the backlighted screen, leading to the slight lack of focus. Speaking of illumination, it's also not something worth writing home about: The GM-S5600 made for itself a life mission to be dim and murky in any condition.

Trying to use the e-reader backlight and reflect it from the case gave me mixed results with a strong bias toward total failure. Yes I know, it looks like the mystery suitcase from pulp fiction, but trust me the only thing it revealed is my lack of photography talent.

Which left me the option to take an indoor wrist shot  that due to the warm light made me look as if I contracted a severe case of jaundice. At least the polarizing filter let me take a clear shot of the negative display, so there is that at least.

Auto white balance can be a fickle friend. I admire your perseverence.

Catskinner · 2 days ago
A white face in the sun