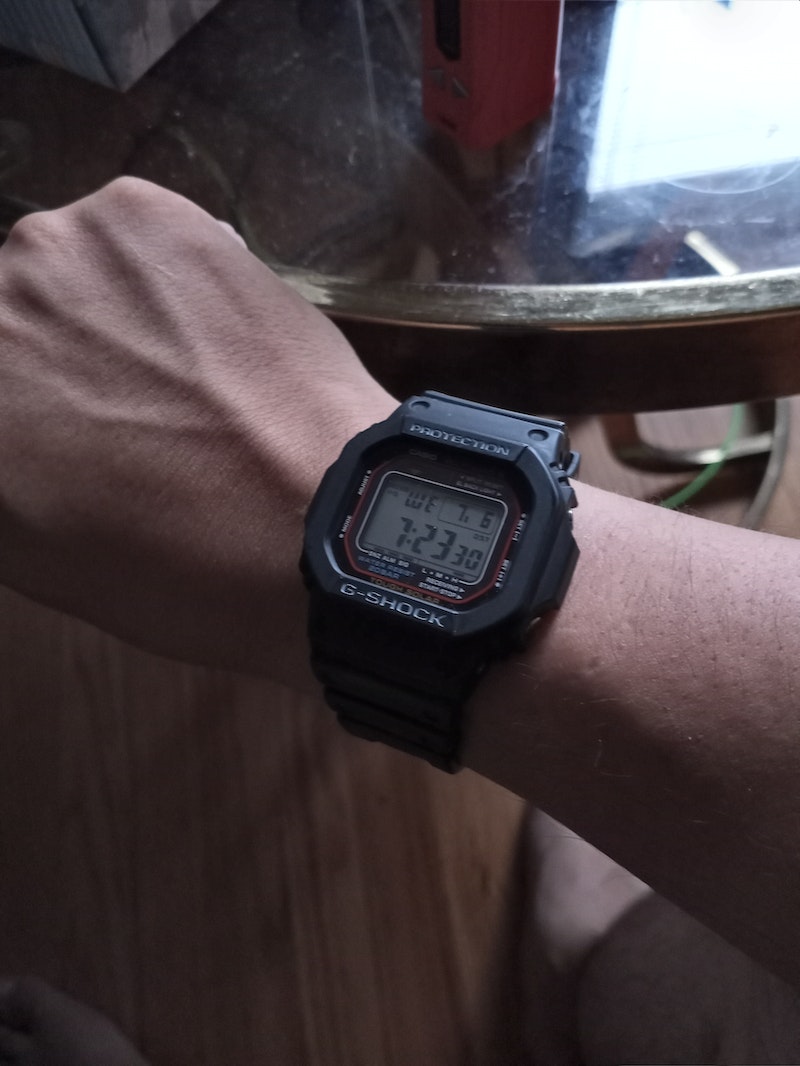 In an other strike against the Invicta Pro Diver, I got a rash from wearing it on a hot and humid day. At least i looked cool at that 4th of July cookout ("wtf is that?" "Yeah I know, isn't it hilarious?") I know it was the PD because cheap metal jewelry always have some effect on my wrist. It was annoying to wear a watch on my left wrist with the rash, but I cannot go with out a watch. What am I going to do, pull out my phone all the time like I'm carrying a pocket watch? Having to ask strangers for the time, only to wait for them to pull out their phone? Ghastly. I don't even want to talk to anyone today. Just walking around with no idea of the time, despite the fact that I have 10 watches seems like a cry for help. But I never wear my watch on my right wrist!

I don't want to wear even a moderately nice watch on my dominant hand, I know it's more likely to get smacked into something. But all of my g shocks are so big! Even my square feels like, this sounds weird but I can't think of a way to say it better, there's something on my wrist. 4  days out of the week or so I wear a bit of cord around my right wrist, usually a rubber band, so it's not like I have a totally naked wrist. I like my watches to be a little gadgety, and i use the functions on my watch all the time, so using my left hand to mess with my watch adds another level of oddness to the whole thing. Also I had no idea my wrists are different sizes, just enough to make a difference.

I'm thinking of going back to that green g shock, at least the light is in the middle. And I guess that's one of my beaters as I have gone as far as boiling it. I don't want to wear my 6900 because I wear it all the time and want to use all my watches to some capacity. Plus both have shocked me with their bulk. My G Shocks only get bigger after those. I tried on my protek, but I imagine that's what wearing Leela's wrist device might feel like, plus that band isn't great. There is usually  a pen and a knife in my right pocket, sometimes the pen frees up and I gotta dig around my pocket. I don't have "nice" knives, by knife standards, but I don't want it to get caught on the watch and have it come flying outta my pocket. Luckily I'm just hanging out so I don't have to carry anything.

The only sensible solution to this quandary is to go buy another watch. This presents it's own challenge, which involves leaving my place. I could try going to a thrift store and picking something out, but a 25 dollar find might turn out to be a bust. And then I'll have to be... out there. Navigating the streets that will seem weird and unfamiliar because I have my watch on the wrong wrist. It'll feel like a Phillip K Dick story, you know what I mean. I don't want to even consider driving right now, something I do begrudgingly at the best of times. Luckily I have tea and coffee in the place. Bread. 1 Energy drink i can combine with an edible if I want to feel like I'm in a story where I'm not my self but don't know it yet. Yeah I'll be okay. I think.

First off, sorry the Invicita has landed you in this difficult position.  Second, that's like 99x more justification than I ever need to buy another watch.  Like if I'm wearing a watch and my ankle gets itchy, I'm buying another watch.  So I'd say you're more than justified in buying at least one more watch.

Just tried putting my watch on my right wrist to test it out...

Absolutely time to buy another watch! 🤣. No more Invicta pls.

Absolutely time to buy another watch! 🤣. No more Invicta pls.

I like my Pro diver, but it makes me want to get a seiko pro diver, which is the movement in it

Trying to live a good life, doing a pretty good job at that.

Bzilla · 3 days ago
All my current Casios

Bzilla · 1 week ago
Some of the collection