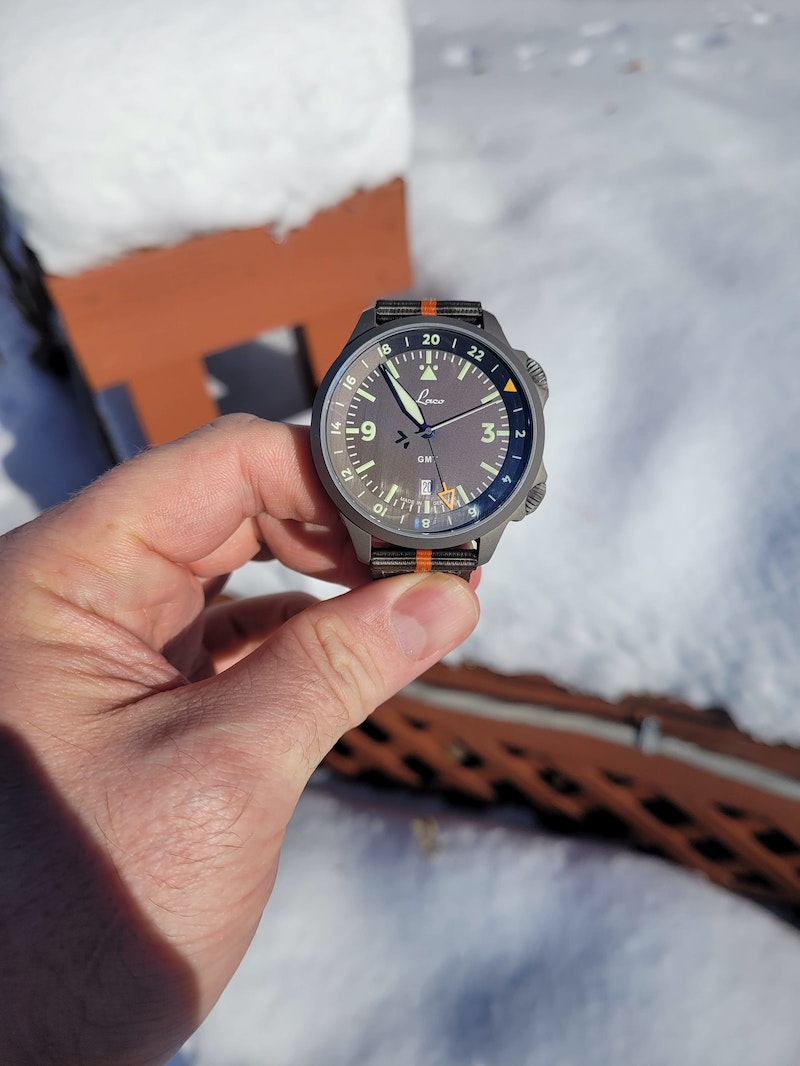 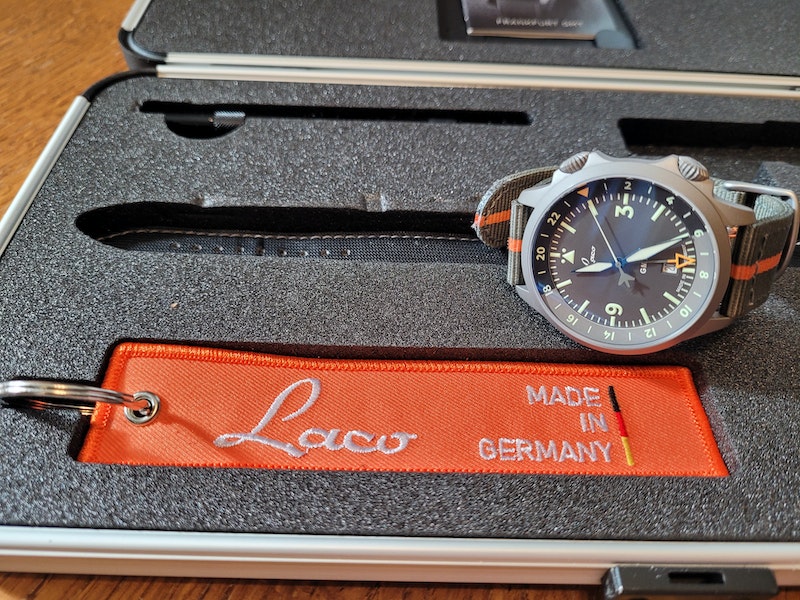 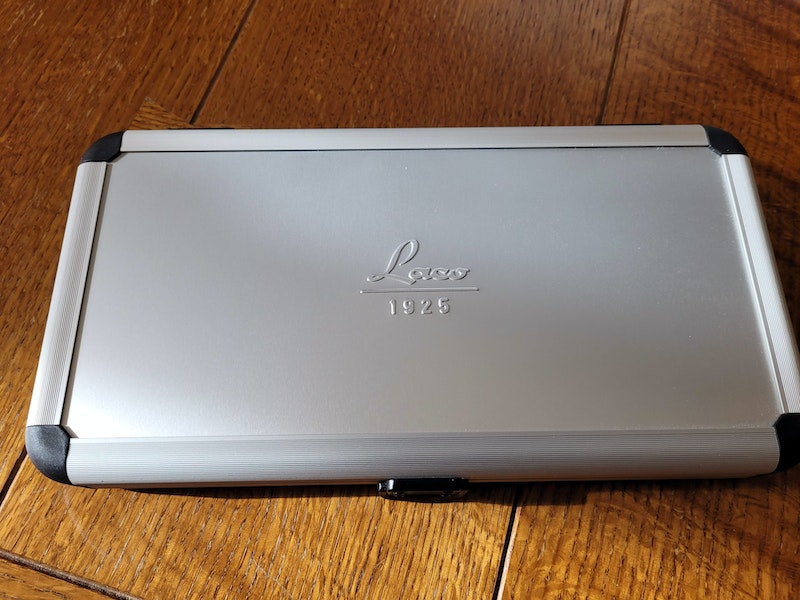 As the news suggests, we got a lot of snow in Western NY this weekend.  As in several feet.  That got me thinking about "adventure watches." Given that I am not going anywhere for a while, I thought I would write a review of the Laco Frankfurt GMT.  While not a field watch in any conventional sense of the term, it is currently my favorite adventure/travel watch.

That said, the Frankfurt gets very little attention.  Laco is most known for its historically accurate editions of classic German Fliegers.  The historical circumstances surrounding the creation of these designs, and Laco's continuing dedication to certain historical details (namely the "FL number" inscribed on the side) has caused some consternation among certain collectors who wonder why Laco does not break free from that legacy and branch out with more contemporary designs? In that sense the Frankfurt could be an important model for the company.  It has a contemporary design that, while preserving some elements of its Flieger heritage, looks like it may have been taken out of a modern cockpit. I like a tool watch that can catch my attention without making a nostalgia play.  That gives the Frankfurt some points in my book.

I am not the only person who has been drawn to the watch's design language.  It won a Red Dot award in 2020 and seems to be moving in a design direction more similar to what might be seen on Sinn, yet not with the same degree of austerity.  Still, Laco seems to have trouble gaining traction with anything other than its traditional Fliegers, leaving the company in a bit of a bind.

Earlier this year I decided that I needed some sort of travel watch for an upcoming trip to Europe.  It would have to be tough and durable for outdoor activities, but also comfortable enough to wear when spending days at a time in airports and on planes.  Legibility was very important to me as one of the few times that I actually use my watches to tell the time is when traveling. That is something that the Frankfurt has in buckets. Finally, I wanted something that was low profile and would not draw unwanted attention.

As I began my research the Frankfurt quickly rose to the top of my list.  At 43 mm not everyone will be comfortable with its asymmetric case, but it fits my 8+ inch wrist perfectly.  I comparison shopped the Tudor Black Bay Pepsi GMT (the Black Bay Pro was not in any of the local AD's cases) and the Longines Zulu Time.  I liked the idea of basing a travel watch on a pilot's, rather than a dive, design.  Honestly I love the Longines, but it seemed too shiny and polished for hiking and camping.  The Tudor may very well end up in my watch box some day. But after trying it on I was afraid that the slab sides and thick profile of the watch would be uncomfortable when actually traveling.  The rounded casebook of the Laco and its slimmer profile seemed more practical than having a true GMT function. The last thing I want to do when sleeping on a plane is to feel like I have to adjust (or remove) my watch to get comfortable.

All of which brings us to the specs.  The Frankfurt is 43mm wide and 50mm lug to lug.  Those sizes are not for everyone so be aware.  Better yet, the watch is 12.5mm thick, notably slimmer than the other pieces I was looking at.  It takes 20mm straps, and the ones that are included with it are pretty nice (there is no bracelet option for the watch, its a dedicated strap monster).

The case features Laco's signature grey titanium sandblast finish (no, I have no idea what that actually means either), and the Sellita 330-2 that powers the callers GMT is wrapped in a soft iron core.  Interestingly, that detail doesn't seem to be discussed on the webpage.  The caseback is closed and features an aviation themed engraving. Buyers have some options as to the grade of movement used.  Laco seems to be ahead of the curve in the customization department.

All of this sits under a double domed sapphire crystal.  Home time is tracked of with an orange GMT hand and internal rotating bezel which is controlled through the top crown.  I was surprised to find that it has a distinct click every half hour.  The signed crowns are both screw down and the case offers 200 meters of water resistance.

The watch face is very legible with heavy hash marks and the date at 6 is unobtrusive. The C3 Superluminova is generously applied.  I would say that lume on the dial is decent, but the hands really excel and glow even brighter and longer than the ones on my Tudor FXD.  However, while the Tudor's fully lumed bezel can be seen from across the room, the bezel on the Frankfurt is pretty dim in comparison.

Is this the perfect adventure watch?  No.  While I really like it, and it has remained part of my regular rotation, I find that it is a bit top heavy and has some "wrist wobble."  I think that the 43mm case would have benefited from 21 or 22mm bands.  While 20s are the crowd favorite I don't think they offer enough support. I am going to try an MN strap next and see if that improves the situation.  I suspect that it will.

I find the Selitta movement in this watch to be ok but not spectacular.  Its time keeping is within the advertised specs but only just so. Perhaps I should have paid the extra money for one of their top grade movements.  Maybe I will get it regulated. Of course the nice thing about a Selitta movement is that I can do that pretty much anywhere in the world.  Also a plus in a travel watch.

Finally, two thousand dollars is a lot of money to spend on a travelers GMT. While I have never found them to be much of nuisance I know a lot of people will want to spend a little more to get into a Longines, Tudor or even a Grand Seiko featuring a true GMT movement.  Indeed, I have my eye on something from GS's Heritage Collection for next year to cover business, rather than recreational, travel. But in a world of go anywhere do everything watches, I found the Frankfurt's unapologetic ruggedness refreshing. Its a tank, a pure tool watch that (on my wrist) can do the work of field watch with a modern pilot aesthetic and GMT functionality.  And that puts a smile on my face.

The Frankfurt is available with either a black or grey dial. In reality both dials are grey, one is just a little darker than the other.

Great read 👌 thanks for sharing.

Really like that case, and I agree it could be a path worthy for the brand to explore further.

Thanks Da_Dutch_Collection.  It certainly stands out in the catalog.  I like the fliegers but I would like to see what Laco could do with more contemporary tool watches as well.

It's a lovely looking watch. I touch too big for me with the 50mm lug to lug. 43 mm I can cope with but it needs a shorter lug to lug.

But beautiful non the less , I have always admired Laco fligers but really like this modern look.

A student of time and space with a watch on his wrist.

Finnarm · 3 days ago
How Durable is a Ceramic Case?

Finnarm · 2 weeks ago
A Worthy Successor?

Finnarm · 1 month ago
A Look at Erika's Original MN Straps