The Swatch that got away 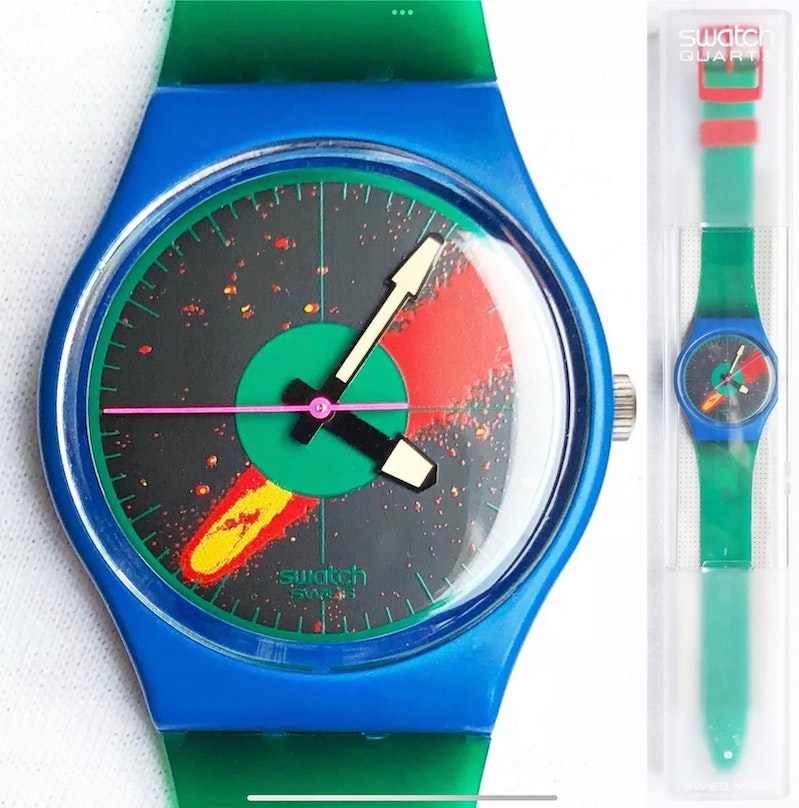 This is one of my “grail watches.” It’s also an inexpensive piece of junk.

I’ve seen a lot of condescension and hand-wringing this week over the Omega x Swatch MoonSwatches. The watches are what they are. They’re meant to be fun. Swatches are meant to be fun. Will they cheapen your real Moonwatch? I invite you to track the values weekly of your Omega or dream Omega on Chrono24 if that’s your thing, and you can let me know in a year if it really ruined the value of your precious. I’d buy a MoonSwatch. And I will still buy a Moonwatch one day.

In 1986, I was a nerdy kid looking for my own identity. I loved space and astronomy. I was gutted when I went outside on a cold Florida day and saw what was left of the Challenger and her astronauts falling to the ground, but I still wanted to go to space.

The cool kids wore Swatch watches. I was not a cool kid. I had a K-Mart Armitron. I wanted one bad, but I wanted one that was “me.” Halley’s Comet was making its 75 year return. Swatch had the “Cosmic Encounter” GS102. No cool kid would wear that nerd Swatch. That was my Swatch.

But it wasn’t. My dad was into watches. “That’s plastic garbage. You’d be better off getting a Seiko.” He was right. I had a few Seikos through high-school, all of which still work great today and are wonderful little watches. He was also wrong, though, because watches are also an expression of our own personal tastes and identity. Later, I remember him saying after returning from an antique market, “If I knew how collectible those garbage Swatch watches would become, I’d have encouraged you to get a bunch.”

The GS102 has gone up in value since 1986, not down. It’s still extremely obtainable, not like a new Rolex sports model. It’s ugly and I wouldn’t wear it much. It’s also basically garbage. One day, it will be mine.

I guess here’s my message after reading a bunch this past week. If some young person or old person wants a MoonSwatch because it makes them dream and smile and they can afford it, just encourage them to smile.

The MoonSwatches are the coolest thing since the Cosmic Encounter, in my book. I own zero Swatches. That is about to change.

I wish you luck on your swatch collection journey👍

like you said, im gonna get what i want and not what someone else wants me to get for my next watch!

Dang. I love a good story and you have delivered me one. Thank you. To dreams and smiles for you and for everyone!

You are right, they’re not meant to be useful daily wears. They‘re meant to be fun and collectable - and they are!

Won’t frown on anyone who loves it and wears proudly.  I had planned to get one for kicks as well.
Glad in retrospect I didn’t, it seems like a disposable fashion item to me.

Wonderful story 🍻 I'm interested to know which moonswatch you would choose?

Wish you luck getting your Cosmic Encounter! The prices might keep rising so hopefully you can find one in decent condition for not too much!

Regarding Swatches in general, I love them. Have had some for a long time. With this current collaboration, I can really see myself getting a few of the MoonSwatches. I would not treat them like precious watches. I would put them through their paces haha

Wonderful story 🍻 I'm interested to know which moonswatch you would choose?

All the MoonSwatches… lol. Seriously, though, my personal order would be:

I didn't even bother talking to my father about a Swatch. I knew he'd say what yours did, and I also knew we couldn't really afford it and I didn't want him trying to figure out how to afford one for me. I'd rather have housing and food.

For me it wasn't "all the cool kids had one", it was "all the cool kids could afford one." I didn't like that they were all bright lurid colors, but if I'd found one in a more muted tone or the right bright color, I might have been interested. I like today's Swatches a lot more than the originals.

"A man with a watch knows what time it is. A man with two watches is never sure." - Segal’s Law