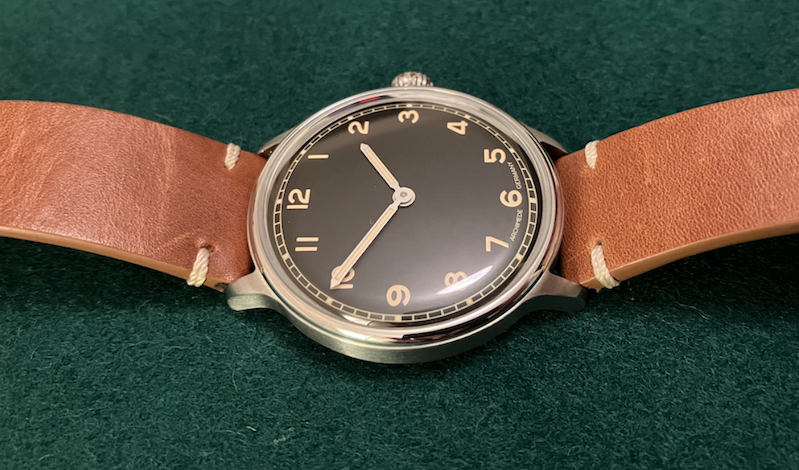 The Archimede 1950-3 does not seek to catch the eye; this minimalist aesthetic is as understated as you can go, and it will be too plain for many.

I started out collecting vintage gold dress watches by the likes of Cyma, Longines and Zenith, amongst others, and this really reminds me of an old jumbo Zenith white dial I had in 38mm, but with the added bonus of modern components.

Some basics: the case is brushed and polished, it has a domed sapphire crystal, is water-resistant to 3 ATM, sports a half onion style crown, and a screw-down case back with mineral crystal. The all-important dimensions: Diameter 40mm, thickness 9,8 mm, lug-to-lug length 44 mm.

This watch is a handsome thing, but I held off buying because I thought the 40mm diameter was a slight risk, even though I have an average 7.25 inch wrist. I am more used to 36-38mm watches, but do have a couple of watches of similar dimensions (but my 41mm Black Bay is a dive watch, so naturally chunky). This actually wears bigger than my Junghans max bill Chronoscope, which I was surprised at as the Junghans has a silver dial, so should wear bigger.

From a distance the watch looks absolutely right, and I have already come round to the size close-up, partly because the lug to lug is so short (46mm).

The thinness is very nice, at under 10mm, and a completely flat back with those tiny lugs which curve down really make it hug the wrist.

I opted for the slightly matt black dial rather than the lurid blue for a more classic look. The dial curves nicely at the edges to imitate the nicely domed sapphire crystal, and is left completely free of clutter except for the rail track at the edge and the vintage-style lume of the hands and Arabic numerals. There is no logo at all on this dial, with just the words Archimede and Germany either side of the 6; for some, that 'emptiness' will be an issue, but I like the clean simplicity very much.

The lack of a second hand will also be polarising, but I intend to wear this as a weekend watch, and possibly a dress watch, so the lack of seconds provides a welcome change to the rest of my collection, offering a slightly more laidback style of time-keeping.

The Ickler case is very nicely done, as is to be expected. One very nice feature is the cutaway between the lugs (see side view above) which enables the very short lugs to work without straps rubbing hard on the case (like with my Junghans, which has even shorter lugs). It is a nice and functional attention to detail that I haven't seen before. The sides of the case are brushed and contrast well with the high polish surrounding the dial.

I'm not usually a huge fan of open case backs, but it was part of the attraction with this watch, despite the standard SW215 movement and the lack of decoration as I didn't previously have an open hand wound. It's nice to see this in operation, especially when I wind that really easy-to-manipulate onion crown. The scratch on the leather strap was all my fault (an aborted attempt to try it on my Junghans milanese), and I may buy the darker strap from Archimede at some point anyway, so I'm not bothered too much.

Overall, I'm very pleased with my Archimede. I absolutely love the clean dial, and the almost invisible branding, and though I still wonder if the watch would work better in 38mm, at this stage, I think Archimede got it right: the minimalist aesthetic makes this watch a reserved and elegant presence on the wrist but with just the right amount of dynamism as light plays on the various curves and surfaces; if it had been any smaller, I think it might have lost a little bit of wrist presence.

Any gripes or grumbles? Not really. Slightly better WR would be a bonus, but not at the expense of that (modestly) onion-style crown.

All in all, this Archimede 1950-3 has ticked a lot of boxes - now all I need is an excuse to slide it discretely under a cuff.

Looks very much like a military-styled 40s/50s oversized generic Swiss so gets my vote.

Thank you for putting this on my radar.

Great review! Agree with you that it would be nicer if it has a slightly smaller diameter, since it’s all dial and it can look a little too big on small wrists (such as mine). Otherwise, I love the minimalist aesthetic! I think I told you that I like the logo placement as well

Add a central seconds hand on that bad boy and I'd be there in a heartbeat.

Fair review.  I agree that it would be better for me at 36-38mm. I confess to wanting a second hand.  For this watch a sub-second would be better, but then it would disrupt that expansive space on the dial. Other than the size, they nailed the 1950 post-military spec watch look.

I absolutely adore the clean vintage military look. If it had a date complication I think I'd be smitten!

An admirer of shiny wrist art. I've recently arrived at a fairly settled collection after years of flipping. That could all change at any time... IG: @tickerstickers

Calumets · 3 weeks ago
Is this serious? Chrono pusher popping out...