My thoughts on the next 'Bond watch' 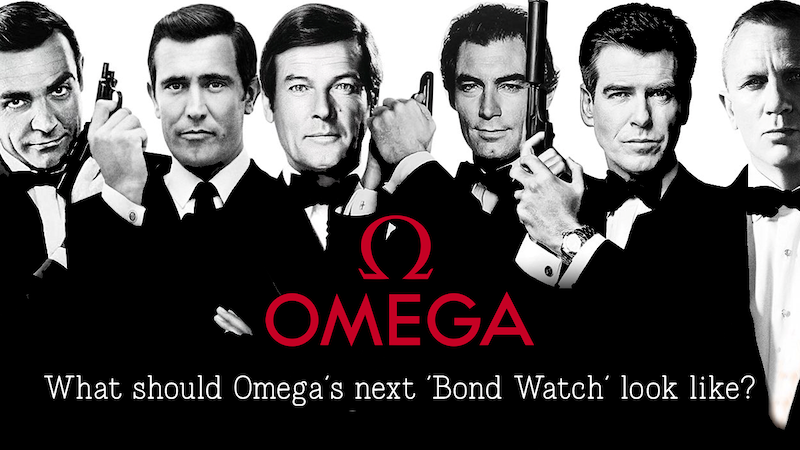 One of my new year's resolutions is to write more. About anything. No matter the topic. So, I've decided to dump some of my watch musings and thoughts here. These are my personal opinions, which are by no means expert. I'd love to read your own opinions in the comments below!

A new Bond calls for a new watch

With Daniel Craig hanging up his gun-holster as the famous British spy, the search is well and truly underway to find the next 007. While the jury's out on who will play James Bond, one thing remains certain: an Omega will be on his (or her?) wrist.

We know the score. Whenever there's a new Bond film, Omega puts out a new Bond watch. This will be no different. However, what is different is the franchise is entering a new era. Other than a fresh face, the series will undoubtedly have a fresh look, style, tone and, of course, watch. And to be honest, I'm here for it.

In the unlikely chance that anyone from Omega is reading this, I'm sharing my thoughts on what I feel the next Bond watch could look like.

Would Bond even wear an Omega?

In 1953, Ian Fleming first introduced James Bond '007' to the world with the release of Casio Royale. In the books, Fleming notes the famous British spy had a Swiss mother and was also a Royal Naval Reserve Commander.

The year - 1953 - is important as it was actually a pivotal year in watches. It was the birth of the 'modern dive watch' we love today. Lip-Blancpain debuted its Fifty Fathomswaterproof watch, followed closely by Zodiac's Sea Wolf. However, neither were issued to the Royal Navy in 1953. In fact, from my understanding, the Navy didn't have its own issued watch. Rather personnel were given a Royal Air Force (RAF) watch: the Omega 6B, nicknamed the 'Fat Arrow' (above).

So, not only would James Bond have a soft spot for the Swiss (thanks to his mother), but the original 1953 character would have actually been issued an Omega given his connection to the Royal Navy.

What type of Omega would Bond wear?

The United Kingdom (UK) Ministry of Defense (MOD) had relationships with a number of watch manufactures over the decades.

But what type of Seamaster?

A major bugbear of mine with Omega is there's so many sub-collections underneath its major lines. Looking at the Seamaster, you have the Aqua Terra, Diver Professional 300M and Planet Ocean collections. And even heritage models like the Seamaster 300 and Railmaster. All of these sub-collections have completely different styles and practical applications. As much as Omega has tried in recent films, they can't ALL be Bond watches.

In fact, Ian Fleming was very clear and consistent about Bond's personality. Specifically, he said: "I wanted Bond to be an extremely dull, uninteresting man to whom things happened to." Are we really expected to believe that such a character would have such a diverse range of watches that he rotates through while on dangerous missions? Call me crazy, but it just doesn't make sense.

While the new line of Omega Seamaster 300's are arguably closest, in terms of design, to the original British Navy "0552" Seamaster 300 -- they're just don't scream Bond to me. It's not what 'comes to mind' when you think of an Omega Bond watch. In my opinion, the Pearce Brosnan-era watches are what most people today picture when they think 'Bond watch.'

To be clear: the wavy bezeled Omega Seamaster Diver 300M Professional Chronometer. Of course, there's slightly different variations and reference numbers, but the general look and feel is the same.

OK, tell me some of the details?

Before I dive into the watch, let's dive back into the source material.

Time and time again, Fleming used very similar words to describe Bond: "I wanted the simplest, dullest, plainest-sounding name I could find.... I wanted him to be a blunt instrument wielded by a government department."

Given this description - and the nature of Bond's secretive, undercover, covert work - I feel he wouldn't want his watch to stick out. That is, he wouldn't want a watch made from super shiny steel and or a bright blue bezel and dial. Nor would we want a watch with too large a profile or too heavy. And he'd definitely want a comfortable, indiscrete bracelet; so the signature "Tank Tread” bracelet doesn't quite fit the mould.

As such, I feel Bond's watch should:

And what about the dial? Tell me about the hands and markers?

Critically, Bond's character was based on a number of individuals Fleming came across during his time in the Naval Intelligence Division's 30 Assault Unit throughout World War II. 30 Assault Unit was officially disbanded in 1946, however, the Royal Marines formed 30 Commando Information Exploitation Group in 2010.

Therefore, it's fair to say that Bond was a full-serving Royal Marine in a special forces-type regiment (E.g., the Special Boat Service) before he went into the reserves. Michael G. Wilson, one of the producers of the Daniel Crag 007 films agrees: "Remember, Bond’s already a veteran. He’s had some experience. He’s a person who has been through the wars, so to speak. He’s probably been in the SAS or something. "He isn’t some kid out of high school that you can bring in and start off. That’s why he's thirty-something."

Let's look back at some of the watches in these types of regiments.

In 1957, the UK Ministry of Defense (MOD) was ready to commit to the Rolex Submariner. From 1957 through the 1970s, Rolex produced four different references that were modified to meet the requirements of the British Armed Forces. While there was a MOD-spec version of Sean Connery’s 'Bond Submariner,' the A/6538, the most widely issued reference numbers - especially within special forces regiments - during this time were the 5513 and 5517.

Finally, in 1980, the Cabot Watch Company (CWC) won the contract for the watch to replace the Rolex Milsub: the CWC 1980 Royal Navy Diver Automatic. As Bond is a fictional character, he remains the same over time. He doesn't age, he has the same background and experience, and so on. Therefore, with every new iteration of James Bond over the last 40 years, it's safe to say he would have been wearing a CWC of some description. These include the likes of the 1980, 1983 and more recent Royal Navy Divers as well as the 1987 and modern SBS Divers.

The reason I give this very short history lesson is because most of these watches have common design elements. Specifically:

So, for those playing at home (and in the know), I'm essentially proposing that Omega release an updated version of it's amazing 2254.50.00 reference, in Titanium, for the next Bond franchise. My really bad mock-up below:

What's your thoughts? What would you like to see in the new Bond watch?

Ok, I'll play. Let me preface this by saying that I've been a Bond fan my entire life, but they lost me because of NTTD. You're darn right I'm bitter!

So, if, as you say, Fleming explained "I wanted Bond to be an extremely dull, uninteresting man to whom things happened to." I propose a G-Shock 5610. Light, relatively small, world times, solar, radio controlled. Inexpensive enough,  and readily available virtually everywhere. A "gray man" watch. No, it's not an Omega,  and I'm not sure what Q could do with it, but it's certainly very low key, and would save the British government a fair chunk of change. It would also most certainly survive to be in the next installment, even should they decide to kill Bond. Again. 🤬

Ok, I'll play. Let me preface this by saying that I've been a Bond fan my entire life, but they lost me because of NTTD. You're darn right I'm bitter!

So, if, as you say, Fleming explained "I wanted Bond to be an extremely dull, uninteresting man to whom things happened to." I propose a G-Shock 5610. Light, relatively small, world times, solar, radio controlled. Inexpensive enough,  and readily available virtually everywhere. A "gray man" watch. No, it's not an Omega,  and I'm not sure what Q could do with it, but it's certainly very low key, and would save the British government a fair chunk of change. It would also most certainly survive to be in the next installment, even should they decide to kill Bond. Again. 🤬

Interesting thoughts. For me the Goldeneye Seamaster was 'my' Bond era watch. The new LE is nice, but to me doesnt look quite right, and I cant quite put my finger on why!

Another amateur collector trying to navigate this minefield.

ForWatchItsWorth · 6 days ago
Is this vintage Bulova fake?