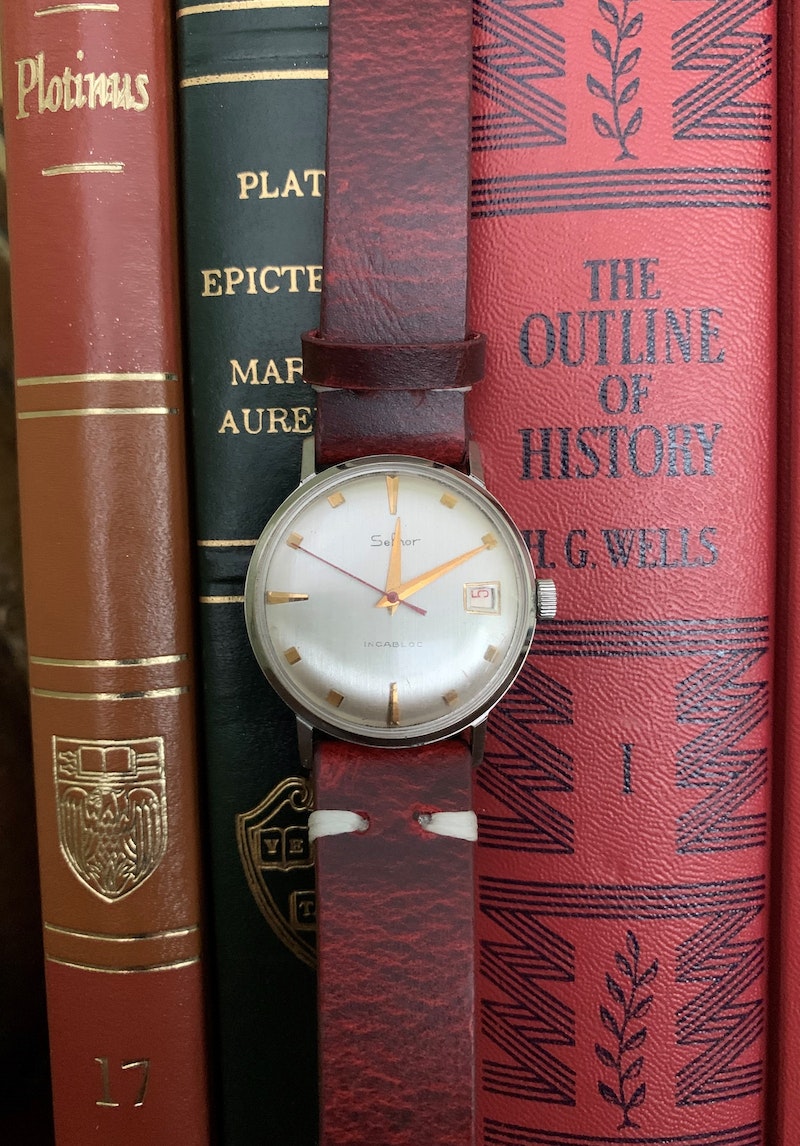 Selhor was a French watch company founded after the Second World War that lasted until quartz movements laid waste to the industry in the 1970's and 1980's.  By the early 1970's they had a reputation for making good divers.  Those are hard to find.  There is a new Selhor trying to revive their diver tradition.  I wish them success.

I don't know what this is or when it was made.  From its styling I would guess mid-60's to early 70's.  It looks transitional between styles of indices. I am a sucker for red second hands.  The brushed dial contrasts well with the indices and hands.

And then we get to the problem.  What is going on with the date wheel?  It must be a date wheel for a six o'clock display. It can't and won't line up. The date is only readable from an unnatural arm position.  The mystery deepens...

I didn't expect that movement.  I don't know what I was expecting, but Austin wasn't it.  As best that I can tell Austin supplied movements to Zale's Jewelry Stores decades ago.  They may have supplied movements to Selhor.  I think that only someone in France could say.  My research efforts lead to a dead end.  I could post this on WUS and maybe someone could tell me in a year or three.

I have a drawer full of mistakes.  This is the first one that I have displayed here.  It is instructive, I hope, on what not to do:  drink wine and scroll through eBay.  Sometimes, you are the high bidder on a watch that should belong to someone else.

With the strap and minor repairs, I have less than $30.00 USD into this watch.  So, I am not upset or angry.  I am chastened.  I still like its styling.  I will still wear it.  It will stay in the collection. It may even get a new date wheel.

That is a strange looking date presentation for sure😮

Aesthetically it is a stunner save for the date orientation. I love how the hands match the indices and at least Dr. Frankenstein matched the date to the second hand even if he got it sideways. I love a great trapezoidal date window too, if it has to be there.

Aurelian · 1 day ago
The Anachronism that is West End

Aurelian · 1 week ago
Can anyone identify...