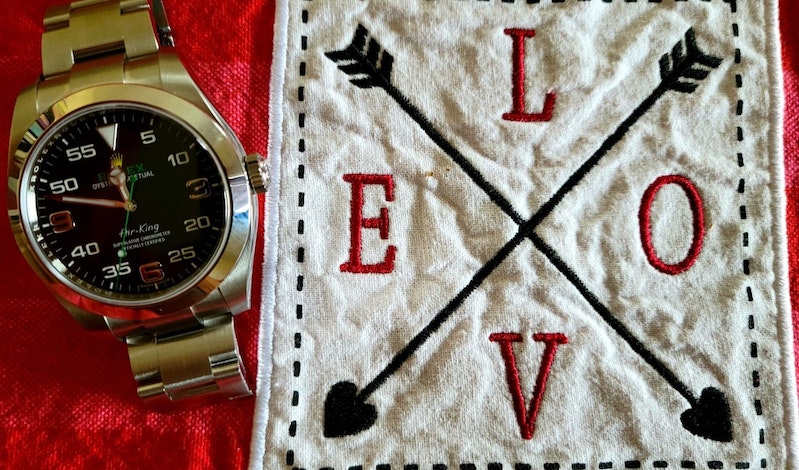 I finally received the call that everyone waits for: the Rolex AD had a watch that I was on the list for. In truth, my town is very small and our local jeweler has been legacy AD so long that Rolex likely keeps them on as a curiosity since they only get one watch at a time and have no display models. To see if a particular Rolex and I may get along in the future, I truck up to a larger national watch seller to try on their display models. However, since it is a large metropolitan area I'm hardly a preferred customer at that storefront, so I don't feel too bad that the employee and I engage in a polite charade that they'll call me if a shipment comes in. All that to say: for my local AD I probably was the list. In these times you take any advantage you can get since scoring a Rolex at retail is an accomplishment on par with summiting Everest. Of course, the one watch they happened to get was the Air-King reference 116900, which if the rumors are true, will probably go the way of the White Buffalo come Watches and Wonders at the end of the month.

I don't have a large watch budget but I've convinced the wife that entering the "alternate asset" class of luxury watches is worth adding to our household wealth. All that to say, she knows my game since this is my first Rolex and I bother her endlessly with pictures and commentaries. So she said "yes" to my specious logic but I've given her a trump card to play when she chooses to call B.S. for something of her own in the future. Still being somewhat new to the hobby, I knew I needed to check my knowledge on the heritage and design of the Air-King namesake, specifically the modern iteration, to stave off any resulting panic from shelling out the retail cost and subsequent buyer's remorse. Because, let's face it, the 116900 is an acquired taste which many Rolex aficionados and fanboys alike would rather not cultivate or just consider anyone who buys it a rube. A well-heeled one, but a dupe nonetheless.

I won't bore you good readers with the details of my research but let's just say this: other reviewers (and Rolex themselves) have spared no expense to explain the heritage and inheritance of ref 116900. However, the consensus is that the watch is a hot mess bordering on soup sandwich that can only be justified by its storied aviation history and modern connection to the Bloodhound SSC Project. The most sanguine and direct was Jack Forster when he described the dial elements as "...a bunch of ill-assorted lifeboat passengers who, thanks to a random twist of fate, were all going to have to learn to get along with each other, or else." Even mister "Hey Hodinkee" himself eventually came to appreciate the reference.

This gets me to point of this review. As a career military professional I've spent some time with my counter-parts in the information operations disciplines. Those who work in the narrative arts are broken down into informers, influencers, and deceivers. Informers are the public affairs types: their job is to tell it like it is for the consumption of domestic and foreign publics. All facts all the time. Influencers work to shape the perception of a target audience but they still keep it to the facts, they just add or subtract a few of the details. It presents a point of view for a purpose. Deceivers typically come from the psychological operations class and they are a special breed of cat. Their whole job is to get you to believe something that is not true and the best among them do that by getting you to go along with your own biases and perceptions. I feel at this point, looking at all the effort that Rolex and others have used to convince one of the value of the reference 116900 that this is a world class PSYOP.  Why you ask? Well here goes in a few words.

Much ink, electrons, and photography has been spent by Rolex and retailers explaining that the value of the reference 116900 is found in its heritage. Yet the consensus and evidence is clear: it looks nothing like its predecessors and is nothing like anything Rolex has really ever produced. The heart is the caliber 3131 superlative chronometer movement straight from the Milgauss as is the 40mm case. The dial starts with an Explorer and finishes with the Bloodhound all while claiming to be an aviation watch.  The bracelet and clasp are unique to this effort with the Easylink extension adding a half-link on demand. Yet, it works because even in the midst of all these derivate components, it really is its own thing. So, while Rolex was trying to execute a world class PSYOP that this is a heritage watch it turns out to be a deceptive endeavor to convince people to overlook the evidence of their eyes and follow their bias.

Look, as someone who started their watch journey literally seeking tools that could handle a field and combat environment, I began to realize why I like this reference. It can handle a boat load of electrostatic energy. The dial is easy to read and has this mix of Explorer orientation, instrument panel, and flieger "B" pronounced minutes that is easy to follow. The 904L oyster steel is tough. The case and bracelet are utilitarian. The movement is a COSC certified chronometer. If you like any of those features in a watch, then on its own, the Air-King 116900 is a decent piece. If you are looking to avoid confusion and remorse by referencing history, this is not your watch. If you are looking for what is effectively a tool watch with sports sensibility with the fit and finish of a Rolex then you may have come to right place. This may be the Heinz 57 mutt dog of the Rolex world, but I'm happy to be the owner of a loyal watch that has so many decent features from so many breeds. Rolex did not need to deceive us into liking it, it could do that on its own.

Great watch ! I just sold mine for 10k I couldn’t say no. It might be discontinued and I may regret it, but I found that i stopped wearing it. It’s beautiful but the amount of 5s got to me and the 05 just seems out of place, but that’s what makes it cool! Is the different factor i regret it now. To replace it would cost me more. This market is nuts and is not going to relax anytime soon. Congratulations it’s a cool piece and I’m sure it will become discontinured and then be worth 3 times retail. I’m sure the guy I sold it to flipped it for 12k but hey it’s only a watch :) well not really Congratulations! I miss the days of walking into a AD abd walking out with the watch I wanted. I’m waiting for the Polar Explore  2, yah that will be a a year at least.

Great watch ! I just sold mine for 10k I couldn’t say no. It might be discontinued and I may regret it, but I found that i stopped wearing it. It’s beautiful but the amount of 5s got to me and the 05 just seems out of place, but that’s what makes it cool! Is the different factor i regret it now. To replace it would cost me more. This market is nuts and is not going to relax anytime soon. Congratulations it’s a cool piece and I’m sure it will become discontinured and then be worth 3 times retail. I’m sure the guy I sold it to flipped it for 12k but hey it’s only a watch :) well not really Congratulations! I miss the days of walking into a AD abd walking out with the watch I wanted. I’m waiting for the Polar Explore  2, yah that will be a a year at least.

Glad I could help you reminisce (and regret) for a moment with this review. It is interesting to see watches now gain $3-4k in value the moment you walk out the door. Unlike a car which depreciates immediately when you drive off the lot. It is crazy, but emotions, passions, fear of missing out all drive consumer behavior. I like the watch enough that I said yes to the AD call and it has not lost its appeal at all...but if push came to shove and we needed the money...I would part ways and let someone enjoy the moment. But for now, I'll enjoy wearing it, sharing it, and hopefully passing it on...but until them I'm keeping my emotional distance for sure. I just don't regret the purchase which was the biggest hurdle to cross.

It’s a great piece and different then any other Rolex which is awesome.

Emerging watch enthusiast. I know just enough to be dangerous to my bank account. Small town kid, joined the military, stuck with it for 21 years, stayed in defense. Greater DC area.

CTReese · 1 month ago
Its new strap day: 20 and 22mm from Strap Mill Canada