Taking a Seiko Turtle home, a love story of a dive watch and the wild lands of Florida 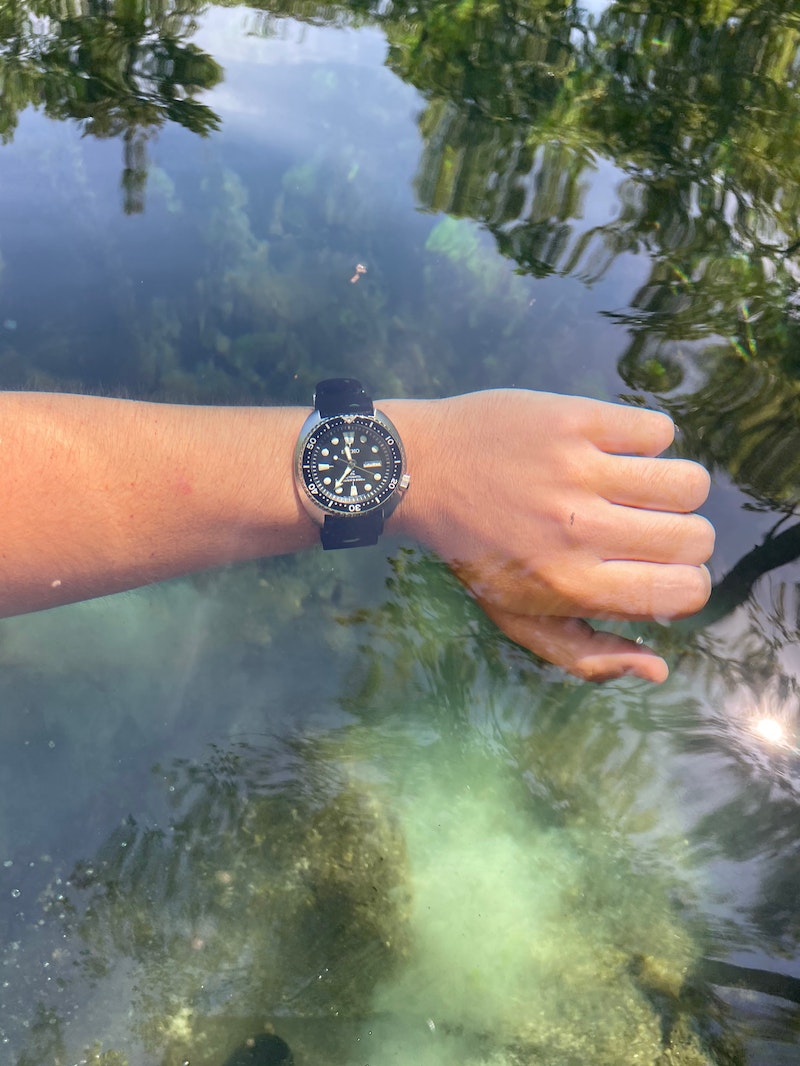 The “Wacissa” is a spring fed river in Florida that travels 11 miles before connecting with the Aucilla and then dumping into the Gulf of Mexico. Both rivers were locations of early human settlements with some of the earliest pre Clovis sites in North America dating back 12,000 years at the Paige ladson site. Modern history here involves the native Timucua people who’s heritage has been all erased minus a few rivers named in their native tongue.

In the northern part of the river sits 12 springs in the first mile, this is where we will spend our time. All new growth exist as the area was extensively logged in the early 1900s .The current dense growth makes you think the vegetation has had to have grown for thousands of years. Visibility into the shoreline is only about 10 feet before reaching thick cypress knees blocking view of the dense swamp. Various bird species, and alligators seem to be everywhere a warning and a reminder of the wild area you are truly in.

This North Florida region is often called “The Forgotten Coast” due to its relatively low development compared to the rest of the coastal areas in the state. In this region sits the Woodville karst. This limestone karst was created millions of years ago by water eroding bedrock and makes most of Florida geologically resemble a block of Swiss cheese. Portals into this window to the unknown pop up seemingly randomly creating vast underwater cave networks. The wacissa has 12 such underwater “Springs” I felt no better place to bring a new Seiko dive watch than here.

I am no geologist so here is a resource to learn more about Florida’s wild past: https://www4.swfwmd.state.fl.us/alafia/karst-topography.php

Back to the watch

The 2019 releases from seiko really continued this new era of re issues by watch brands. It seems in the last 2 years just about every watch below $2,000 has been a re issue of some sorts from the bigger brands. While I’m ok with this I do think some brands are relying too much on older designs and worry what the effect of this will be in say 10 years. Seiko on the other hand seems wary of just relying on past heritage but still does some tasteful re issues. Seiko produced the original turtle the 6309 for 12 years from 1976-1988 with a sort of a cult following it’s not shocking seiko would re make them with modern components and throw them in the srp series and dub them the srp777.

New seiko srp777 next to the original seiko turtle. Courtesy of wornandwound.com

Seiko is pushing upmarket with many of their prospex and presage line so it’s nice to see a sub $500 proper ISO certified dive watch that has all the seiko design language we have come to know, and love. Seiko released multiple new srp prospexs divers at Watches and Wonders, Including a new version of the fan favorite Seiko Turtle. Today we will be reviewing the Srp777. Before diving ;) into the actual experience with the watch let’s go over some specs.

Case size is 44 and a half mm but don’t let the size fool you this thing wears great on just about any wrist. A lug to lug of 47.5 let’s it sit perfect on my 6.5 inch wrist. Using Seikos fully in house automatic caliber 4r36 with a 40 hour power reserve, hacking and hand winding capabilities beating at 21,600 bph mean this is a perfect upgrade from Skx level seiko dive watch. Water resistance is 200m using a great beefy screw down crown at 4 o’clock. Msrp on rubber strap is $495. With lume so bright it would make the sun jealous this watch really seems like a great deal.

After diving with this watch you really see why Seiko enjoys the reputation they have come to know, extremely legible dial underwater, looks great on any wrist and every time I throw it on I wanna go on an adventure. Seiko killed it with this release.

Freediver, watch lover, crappy watch photographer. Most post won’t be just about watches, typically how these mechanical devices make me feel and interact with the world.