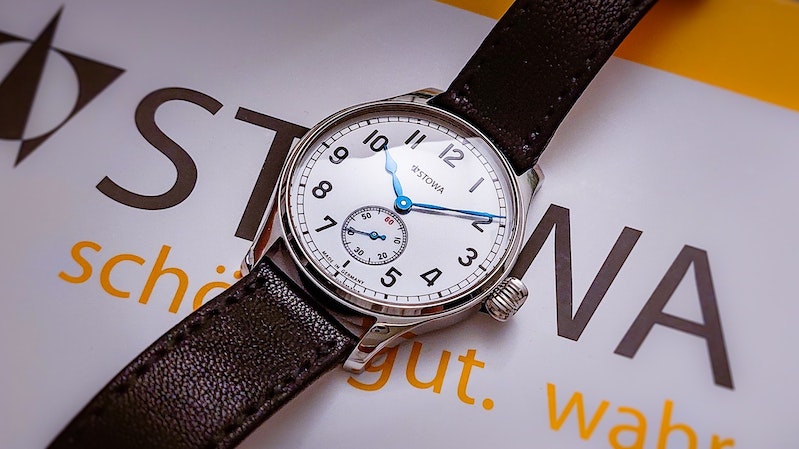 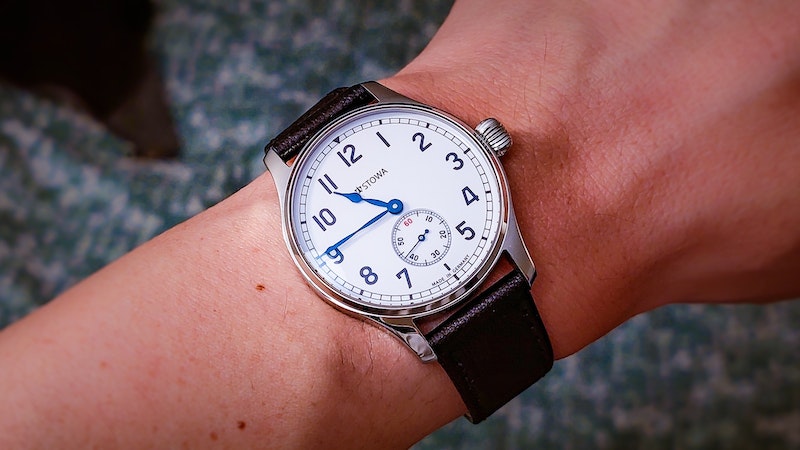 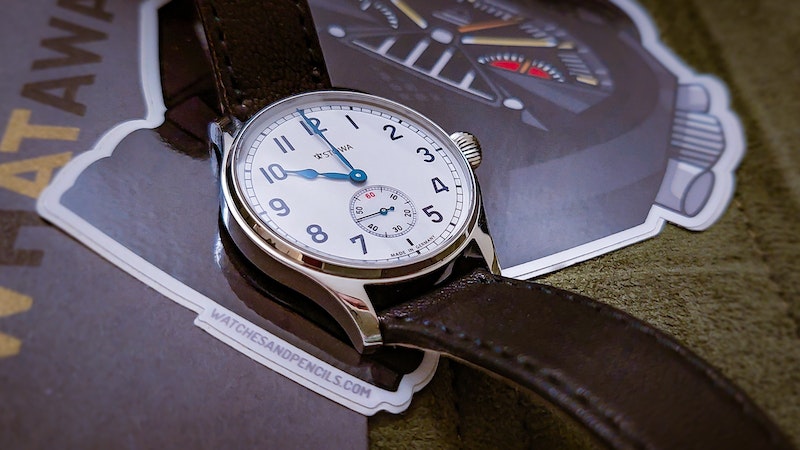 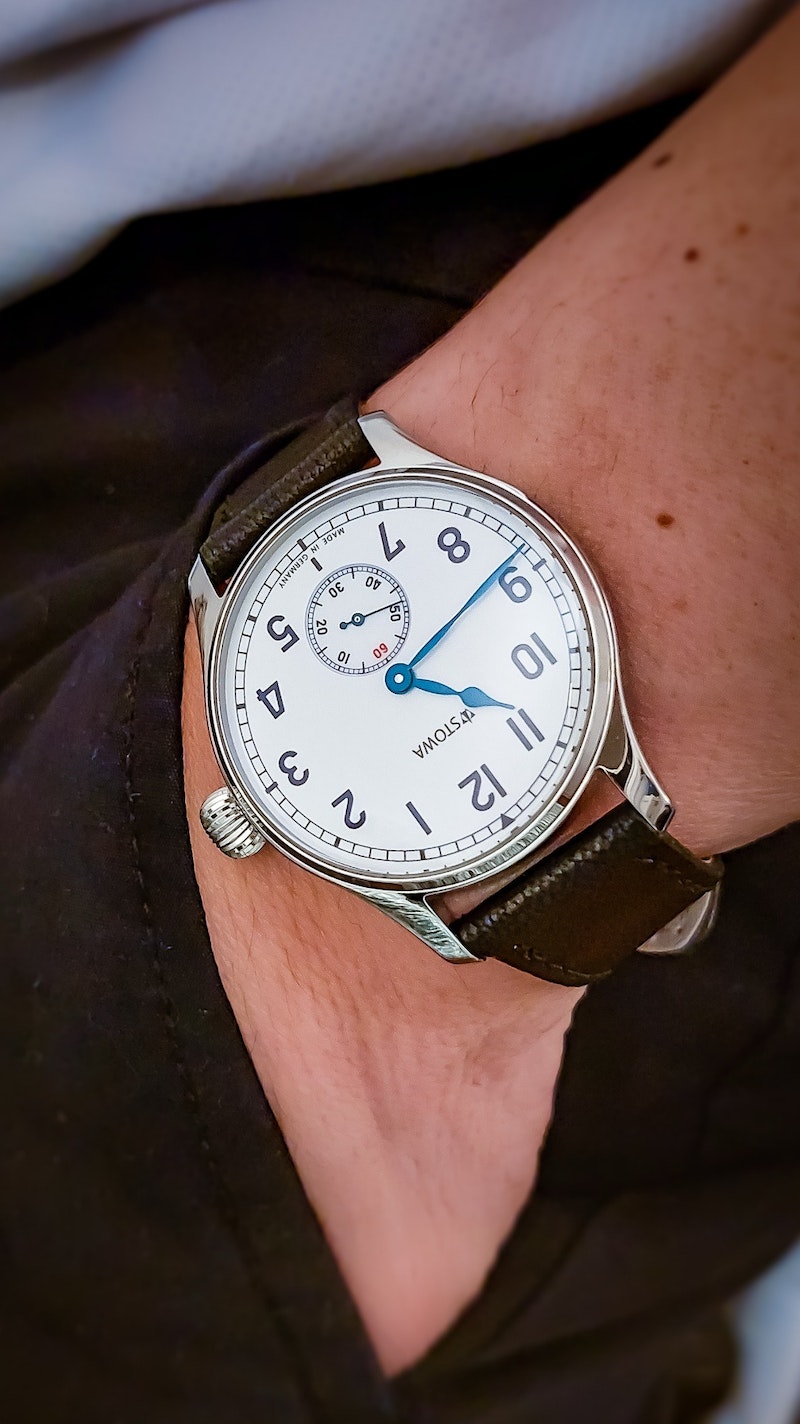 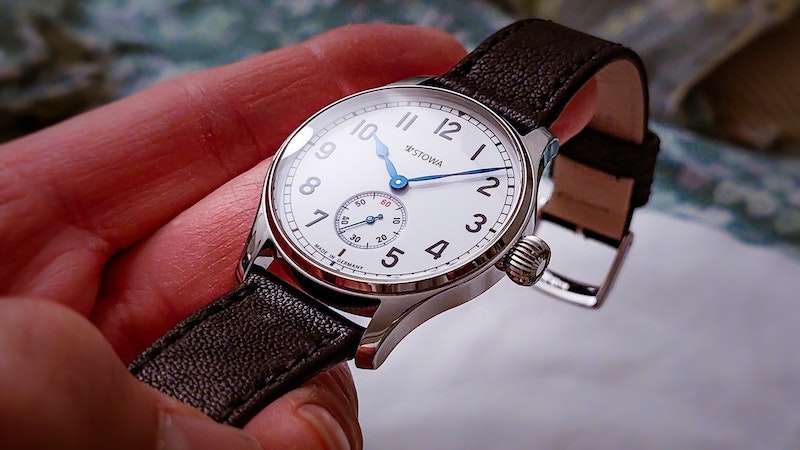 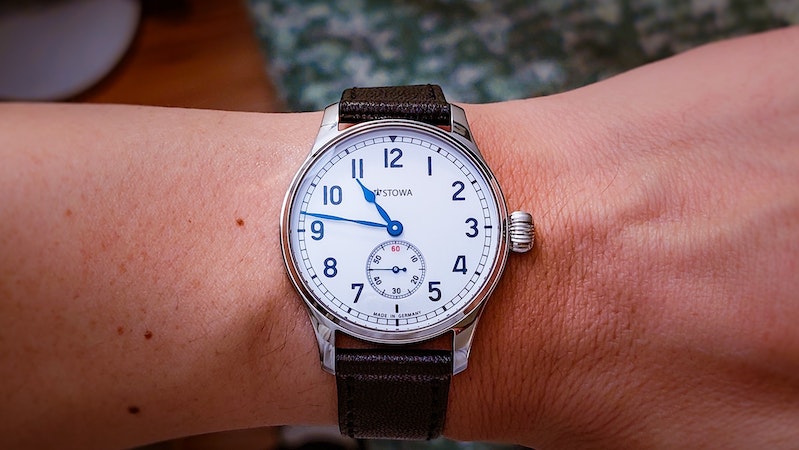 Wanted to share some initial photos I took of my latest acquisition. I have this thing for small seconds. And, although I own a couple of chronographs that do have a small running seconds, it's not quite the same thing. I mean having a small seconds on a watch that may be time only or time and date. Usually the designs that come to mind are a field watch, like a "Dirty Dozen" style. Or, a marine chronometer or deck watch. At this moment, I opted for the latter style.

This will get long enough, so I will "try" to make less long by stating that while indulging in watch curiosities online, I stumbled upon the model you see here. It wasn't what I was actively looking for at the time. But, it became my only focused quickly after learning more about it.

This is a limited edition collaboration watch of only 100 pieces between Stowa and South Korean based watch boutique Whatawatches. Some may know of Whatawatches from their more recent collaboration with Squale. I was looking at those Squale watches and decided to see what else Whatawatches had. Then, I clicked on "Stowa Marine Midnight Seoul Edition"... And, that was pretty much game over after I was brought to the next page.

I had been interested in getting another marine chronometer watch for a while. The ones that Stowa could make to order peaked my interest a number of times. They have something very similar to this one here. The key differences that make it a little more special for me are in the subtle details.

On the front:
- Midnight blue print on the polished enamel-like white dial. Yes, look closely and the only black print is the STOWA logo and "MADE IN GERMANY". The rest is in a dark blue color.
- Small red accent on the "60" in the small seconds subdial. BTW, other than the obvious red "60", the print in that small seconds subdial is also in the same midnight blue.

On the back:
- The Top Finished Elabore Perseux 7001 mechanical handwound movement is nicely decorated and viewed from the display case back. Look closely and you will notice the engraved motif on the main winding wheel. What they call the "Great Absolute", it is essentially the Ying Yang symbol that is from the South Korean flag. It's a simple but effective rotating animation when you handwind the movement.
- Engraved unique limited edition number
- Engraved "Marine 36 Limited Seoul Edition"
- Engraved "Handwound" text. The knowledgeable and observant will note the standard text normally reads "Handwinding". It's a small difference in the play of words. But, like most of us watch enthusiasts know and appreciate, it's almost always, if not a large part, all about the details.

I think the compact and very slim form factor coupled with the special limited edition attributes made this one a must own for me. Btw, quick dimensions are 36mm case, 8.5mm thick, 44.6mm lug to lug.

Is 36mm too small? For me it's perfectly fine. It's a white dial watch with a lot of dial and minimal bezel so it fills out that 36mm pretty well. I've included a small group photo with this watch next to a 39mm Serica 5303 and a 40mm Direnzo DRZ04 Mondial for size comparison.

Sure, when I jump from my main case size range between 39-41mm, there is an initial proportion shock. However, when I give it a fair wrist time on its own, the size differential awkwardness disappears and it begins to feel natural and proper on the wrist. This adjustment period works for scaling up the case size, as well as, scaling down.

Granted, not everyone has this mindset. And, I recognize the differences in wrist size and shape between individuals may have true limitations to what is comfortably possible. But, I still kindly advise wear what you really like. And, for me, owning watches that occasionally dip smaller and larger in case sizes opens up the range of watches I can enjoy.

I've been wanting to add back a marine chronometer style watch (a.k.a a deck watch) to my watch collection. My last two were both Hamilton Khaki Navy Pioneers. First, the navy dial with silver hands. And, second, the more classic silver dial (looks white) with thermal blued hands. But, I did end up selling both at some points.

The Hamiltons were both fine watches, especially for their price. And, both the wire lug case and dial designs were unique to the marine chronometer genre of watches. I think the only niggle with either was the date window near the "3". While the dial was able to maintain a mostly uninterrupted symmetrical appearance by scaling down "3" to fit the date window, it was always enough of an asymmetrical visual anomaly I had to constantly excuse in my head.

Otherwise, they were perfectly performing watches with a nice slim and compact size on wrist. A classic design that is quite versatile dressed up and down.

I think this Stowa has both addressed the dial symmetry by completely omitting a date complication while maintaining a classic and unique deck watch design with its limited edition nuances that separate it from the standard stock from the brand.

Allow me to be the first to say "DAMN that is nice!"

thats a beautiful watch, love the caseback too. congratulations 👍👍

I simply LOVE the Stowa marine line! Sadly, my Vario trench watch 37mm has satisfied my hunger for retro watches with small seconds... at least for 2022. 😅

Allow me to be the first to say "DAMN that is nice!"

Thanks. Definitely loving the clean, compact, and classic presence in wrist.

thats a beautiful watch, love the caseback too. congratulations 👍👍

I simply LOVE the Stowa marine line! Sadly, my Vario trench watch 37mm has satisfied my hunger for retro watches with small seconds... at least for 2022. 😅

That's a good watch too. Was very close to getting one myself

KhronoKraze · 14 hrs ago
Field Watches - Not every design is for everyone, but everyone should be able to find a likable design.
KhronoKraze · 5 days ago
Sometimes, you (eventually) have to scratch that itch.
KhronoKraze · 2 days ago
Watch modding digital style