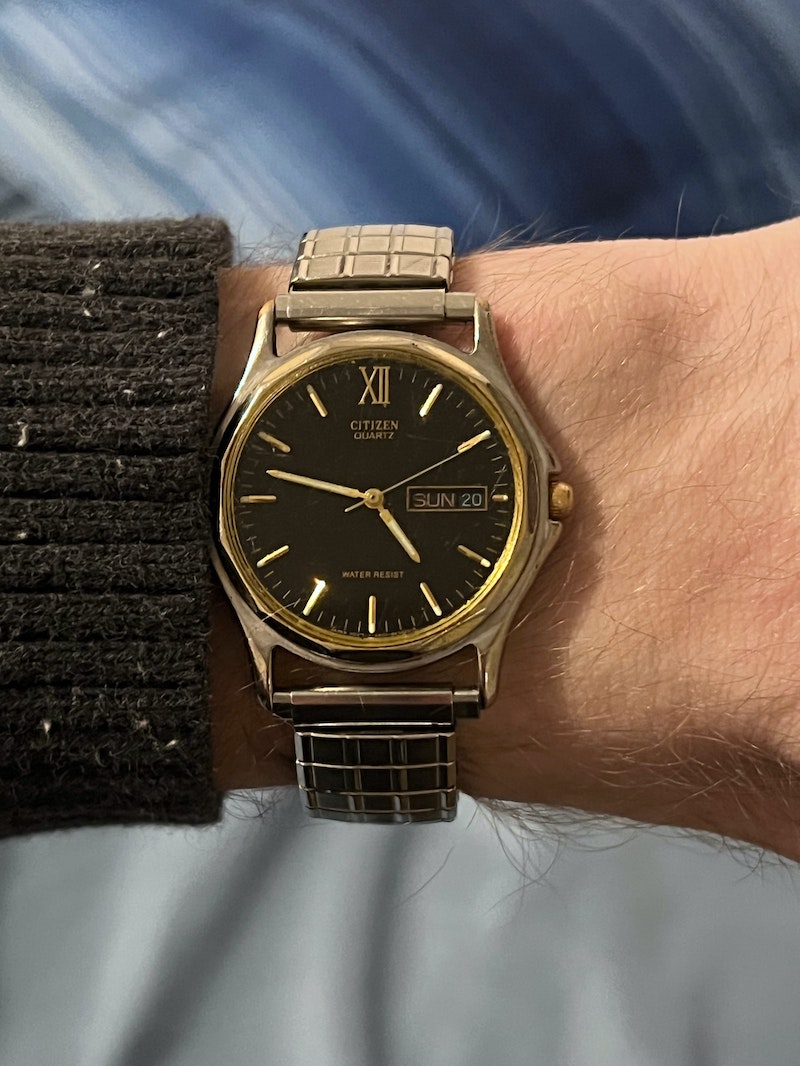 I finally sat down and watched some videos on adjusting the Speidel Twist-o-Flex bracelet that came with my Grampy’s watch that my Grandma gave to me a few years after he passed.  She gave me that watch probably 7 or 8 years ago, so I’ve had it for a while in drawers, and placed by photos of him.

One video starts out “once you adjust one of these, you’ll never want to touch it again”, and I could see that with some people, but us watch folks who are used to adjusting clasps, buckles, and maybe even doing some modding shouldn’t have a problem with it. I won‘t detail how to do it on this post since there’s tons of videos on it and it’s much easier after seeing it done and hearing it done rather than just reading directions and adjusting it, but it is very possible and I was able to do it.

Now I can comfortably wear my Grampy’s watch whenever I want, even though I will probably keep it at home most days just to keep it safe. The quartz movement is okay but I can see a little struggle in the seconds hand when it ticks and I’ve had to affix one of the hour markers in the past after it fell off, and I don’t want to take the risk of it falling off again.

Some photos of the basic tools I used and my Grampy. In the lower right photo is a much younger Grampy with my Mom on her wedding day, over a decade before I was born yet.  He was a WWII veteran, who never spoke a word of his experiences (according to my Mom), as I understand is the preference of many veterans—I could only imagine the things he saw.  My Mom would tell me that he would say growing up in the Depression was unlike anything we know these days. Some days all he would eat was a single apple—including the core, stem, and seeds.

I will look to this watch whenever my life feels difficult, and remember that if a man who went through all that could still be a loving husband, father, and Grampy, then I can make it through my difficulties.

P.S I haven’t done any research as to which model Citizen watch this is, probably late 90s, early 00s if I had to guess, but I don’t care about the reference number or model name, I would honestly rather it just be “my Grampy’s watch”.

Very nice story, thanks for sharing.

I initially took the title to mean you'd grown into it, and was going to advise that, as you know, these can be adjusted. Clearly you're bright enough to know to hold on to the removed pieces, as people have this habit of growing even after entering adulthood.

I'm glad you're not afraid to attempt things. Some people are such nervous nellies, all afraid of trying even the mildest repairs.

I initially took the title to mean you'd grown into it, and was going to advise that, as you know, these can be adjusted. Clearly you're bright enough to know to hold on to the removed pieces, as people have this habit of growing even after entering adulthood.

I'm glad you're not afraid to attempt things. Some people are such nervous nellies, all afraid of trying even the mildest repairs.

Thank you, I’ll be honest once I separated the bracelet into two, I was like “crap I need to get this back together again, can’t just give up if I can’t figure it out” 😂 it really wasn’t as bad as the gentleman in the video made it seem, but I did forget for a minute that this was my grandfather‘s watch, and the only one I have from him, and I didn’t want to mess it up.  Truly I think almost anyone could do it, it’s just a strange bracelet, to me at least.

Very nice story, thanks for sharing.

Thank you, I will probably look into that. I do want to know when it was produced. Certainly I don’t think it can be too old, but I’ve been surprised before—it could be nearly as old as me, or older. I was born in ‘96.
Thank you for the tips!

Good story glad you have a very nice watch to remember him. Color gold and black goes well.

Good story glad you have a very nice watch to remember him. Color gold and black goes well.

Thank you, I really like the design as well. The dial has a cool pattern to it, although almost impossible to see under the wear on the crystal, but I’m going to leave it all as it. No polywatch for me on this one. Thanks again

HoroMichigan · 2 weeks ago
Job Interview Today! Do You Think it is Tacky to Wear a Homage to an Interview?

HoroMichigan · 4 months ago
My Wait is Over - Is the YouTube Hype Justified?