My perfect military watch didn't exist back then 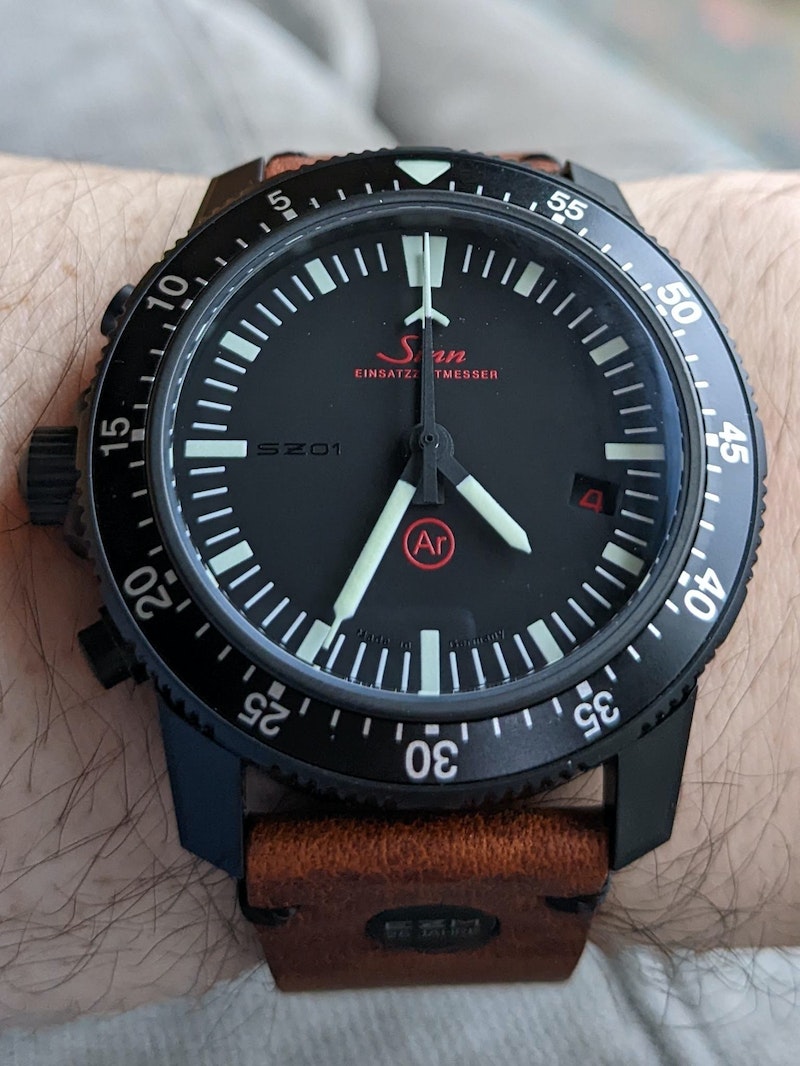 Growing up in the Pacific Northwest, everyone learns about totem poles in school.  We learn that each section has a specific meaning or tells a story.

Watches are totems.  They tell stories to the world about who we are, where we have been, or where we aspire to go.

Watches were a required piece of kit for my role in the military, but the watch that reminds me of my combat experiences is not the same watch I wore on raids.

At that time, my particular community within the military wore "hockey puck" watches.  Many of my colleagues wore the Suunto Core while my hockey puck of choice was the Casio G Shock GA110-1B.  Shock resistance was an absolute necessity and was the deal breaking factor that eliminated most mechanical watches from consideration.

The watch I wear now, which would have been the PERFECT watch but it did not exist when I needed it.  Today it reminds me of my missions, of the specific fieldcraft/tradecraft I performed, and its ruggedness inspires me to think about the future adventures it will accompany me through.

Left side Crown & Pushers
I used to shoot with a technique that the left-side crown was originally designed to accommodate.

In the shooting position I used back then, I started with the rifle tiled to the left, placed my left hand fingertips on the topside of the rifle, then rolled my left wrist down until the magazine pressed into my forearm.  If you try it, you'll notice you get a very stable platform with your left arm.  This also kept my profile very streamlined and prevented my elbows from sticking out to the side, and reduced the chances of flagging my position around the corner of a wall or building during an urban fight.

The crown and pushers on the left side a bit outdated in 2022 since many of us have shoot using the c-clamp grip these days, but that technique did not become widely used until nearly 15 years after the first EZM 1 was made.

I appreciate that the crown on the left means this watch was designed with shooters in mind.

Center 60 Minute Chronograph
In my role, we had to coordinate with other individuals to execute specific actions within a very narrow window of minutes.  These actions had to be performed with no verbal or radio communication to the other individuals (for security reasons), so timing accuracy dictated whether or not the mission continued.

During the reconnaissance and planning phase of certain missions, I needed to time the number of minutes it would take to cover specific distances.  I know that for my stride length, I cover 100 meters in 138 steps. We just count every left step, so for me it was super easy to remember— I just counted to 69. (giggity)

I would have occasionally checked my pace on each timed segment with a quick glance, and you can see how easy it is to read on the picture below that 55 minutes elapsed on the chronograph.

Compare that to trying to read those tiny subdial on most other chronographs (and having to look for the additional 30 minute increment dial).  Sure, it can be done, but this is MUCH faster.  You can even run at your top speed and still read your time/pace on a centralized chronograph.  You wouldn't be able to to do that on small subdials.

There were also missions/scenarios where we needed to know what our mission elapsed time was.  I used it a lot when we were taking a helicopter somewhere because it was hard to figure out how close we were to our objective while sitting in the back of a helicopter.

The EZM 1.1 allows you to track three times: local time, mission elapsed time, and the countdown bezel gives you time hacks for time on target during a raid.

Countdown Bezel
The most famous example of why a countdown function would be useful is an anecdote from Operation Neptune Spear (the mission to get Osama bin Laden).

The SEALs knew they had exactly 32 minutes on the ground based on the fuel calculations for the helicopters to make the 90 minute return flight to Jalalabad with everyone on board.

On my raids, we set a time limit on our objectives to reduce the chances of being ambushed during our exfiltration.  If we spent too much time on the objective, hostile folks in the area would have time to gather and set up a hasty ambush to hit us on our way out.

Though those days are behind me, I still have a compelling usecase for this feature.  Many people plan to get to the airport 2 hours before their flight.  I am not one of those people.

I evolved what I refer to as a "highly optimized" approach to air travel where I arrive at my gate at the last possible minute without missing my flight.  For example, if I had a flight departing at 2 pm, I know that the FAA guidelines dictate that the gate doors close 10 minutes before the scheduled time, so I need to be at my gate before 1:50 pm.  Setting the bezel to :50 minutes, the minute hand now points to how many minutes I have to get through the airport.

(just under 8 minutes remaining to make my flight)

The countdown bezel is awesome because it helps offload the small amount of mental math when you are moving through life with a sense of purpose and take that brief glance at your watch.

It's those little moments that help you bond more with a specific watch over others.

Blacked Out Text & "Noise Reduction"
The black color on this tegimented steel case was reminiscent of the black hockey puck watches I gravitated towards.  Beyond that, I loved how Sinn also blacked out the Made in Germany and SZ01 movement text on the dial since that information is superfluous when all you need to know is the time.

I appreciated that Sinn took a stance to oppose that popular trend where dial text is beginning to resemble the Star Wars opening scene.

I loved that the date is red on black.  The date is visible when you need to see it, and out of the way when you only need to know the time.  I love the noise reduction.

The red text also completely disappears in low-light/nighttime viewing moments, which is a cool effect as you wear the watch throughout the day.

Low-light/Nighttime Visibility
This watch looks a bit "plain" in daylight, but the lack of superfluous detail makes this extremely visible in a number of moments.  In low-light moments, it's still really easy to see the time at a quick glance.

(my phone automatically brightened this a bit, it was taken in relative darkness)

I drive a manual transmission, and my habit is to grab the steering wheel around the 12 o'clock position while shifting gears.  I love that, at night, I can still read the time at a very quick glance without needing any illumination or having to take my hand off the wheel.

The hand shapes (sword hour, syringe minutes) also make it very easy to read the watch in complete darkness when the lume is activated.  The chronograph minutes and seconds are very easy to distinguish.

I happened to catch a moment where my chronograph minutes overlapped the hour hand at the 5 o'clock/25minute mark.  I captured this moment because it really highlighted the thoughtfulness behind the design choices.

Cons?
We, as certified watch nerds will always find something to complain about.  There's probably some sort of embedded metaphor about finding beauty in the imperfect nature of life or something—

I was concerned that the lack of a running seconds hand would bother me.  A running seconds hand is a required element of dive watches because you need to know if the watch has stopped running for safety reasons.  Regardless of being underwater or not— you would want that same assurance while on any mission.

Then I realized that, you would just start the chronograph at the beginning of the mission ("mission timer," duh!) and the running seconds on your chronograph would have made an additional running seconds redundant.  That thought exercise made me appreciate that extra bit of "noise reduction."

The other major con is the choice of a domed crystal instead of a flat crystal.  For a watch so tactical in nature where so many decisions were made in the spirit of maximizing readability... a flat crystal would have been much more readable and reduced unnecessary glare/reflection.  I appreciate the AR coating, but the domed crystal still baffles me.

Who tells your story?
I hope that my future descendants will want to keep my watches and I hope that the watches will remind them of me when I'm no longer around.

I still aspire to someday get that elusive Lange 1, but even if (*when) I do— that definitely would not be my "everyday beater" watch and I would need a fainting couch the minute I see the first scratch on it.  Even if there was a Lange 1 to pass down, it would realistically live in a box/drawer/safe and worn only a handful of times, if ever.

My descendants will likely associate associate the strongest memories with the watch I wore the most— which would end up being the most rugged watch (this one).

The tegimented treatment on this case increases the likelihood this watch will be in great shape decades from now, even with daily wear.  I hope future generations will appreciate that "new old stock" condition.

I hope the quirky features of the watch will reflect aspects of my life and personality— like a Totem that tells my little chapter of the family story for the generations that follow.

Great write up of a watch’s specific features through your unique experiences using it as the tool watch that it is! Loved reading this. Wear it in good health!

WOW, the way you described this watch from your experiences and habits is amazing. Really enjoyed reading this.

Great write-up and well-reasoned based on personal experience and habit. Those of us who do not naturally gravitate towards genuine tool watches often forget that there are real considerations for selecting them. We are often more concerned with whether something looks good with a blue suit.

Great post and now I greatly desire this watch.

Great write up and and thank you for your service.  In my later years in service I often wear my Sinn 556A to work, but in my younger years as an Air Force helicopter mechanic working the flight line I too wore a G-Shock.

I am wondering if Sinn chose a dome over flat to be more stable against impact and pressure than a flat crystal. With a dome they can add more material to the center so that the edges take more of the stress.  A flat crystal will actually deform in the center.

This is a fantastic watch and great to see an actual warrior using it . 👍

An interesting write up on a watch that is clearly fit for your purpose! A bonus that it looks very cool indeed!

Great read, really enjoyed your description of the practical usages of the watch’s functions, awesome stuff.

My search for a horology support group led me here.