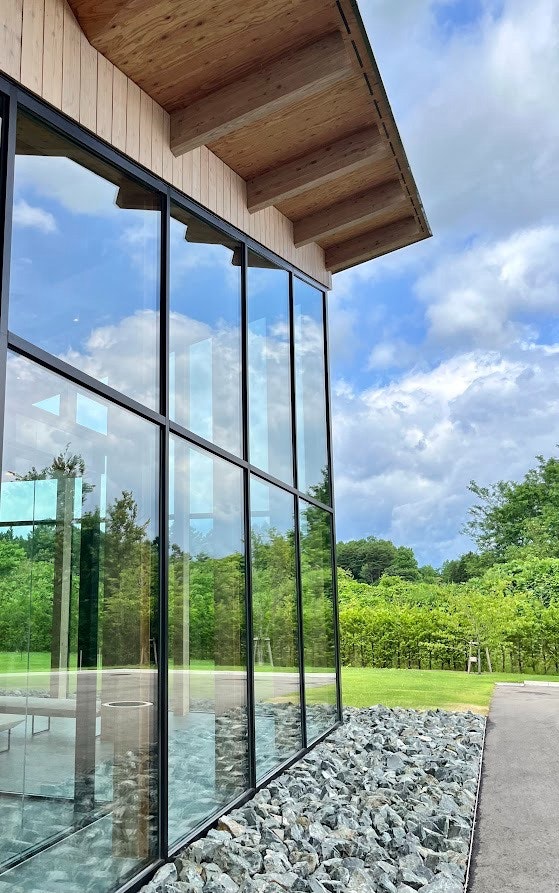 (DM me to ask for pix link)

No, I didn't get one.  Biggest fanboy me still doesn't have one.  I recently visited the GS factory and studio and am finally writing things up.  Whoop whoop!  (Finally bored enough on a night shift to knock this out)

TLDR - Basic tour probably not worth the trip unless you really love GS and happen to be in Northern Honshu.  Also, no free GS 'sample' given at tour end, sadly.  I had fun, but that's just crazy me.

Getting the invite: Not tricky now, I think it's just an online application - but was a coup for us.  In early July when we visited, it was still closed to the public.   Covid lockdown protocols had meant we were the first visitors in about 2 years.  They had plans to start tours again the following month and we were initially told we couldn't visit.  But several pushy and absurdly polite letters from my wife (she is a pro at this stuff) and we had our private invite.

It’s a long, arduous, twisting trail getting to Shizuku Ishi.  Best option is easy: drive there!  Sadly most of us don't live in Iwate and for non locals you will probably take the shinkansen from Tokyo. It’s a beautiful countryside in that area, you can enjoy rolling fields, small cities and old villages as you zip through that part of the country.  It's North from Tokyo a few hours and you get off in Morioka.  Then take a local train to Shizuku ishi stop.  Next ask your Japanese speaking wife or huzzy to ask for help from strangers to get a taxi.  The studio is still a few kilometers away and it's very 'countryside' there.

The taxi we eventually secured had never heard of the world headquarters of Grand Seiko that is central in his town.  Swell!   So with some phone calls to Grand Seiko staff and some google map help we assisted him in finding it. Then we got dropped off on the wrong side of the massive complex.

Cut the to the chase - we finally reached the correct spot, and being Japan, there were several lovely people in watch lab coats waiting outside to greet us.  The honored guests arrive!

The Tour : Starts with a little tour of the outside and looking at architecture and bug hotels (not a joke) and the gardens they have and are expanding. Very natural and holistic themes.  Inside we met several staff members and after chatting a bit we watched a video (in Japanese) about the history and traditions at GS.  Kind of knew all that stuff, but they assume you only have cursory GS and watch knowledge.  Next you can peruse dozens of glass cases filled with samples of the mechanical watch internals.  Mems technology, hairspring stuff, case designs over the years, etc etc..

Next section, we walked along beside the huge watch studio.  It was behind glass but we could watch 70 or so people in labcoats, masks, hats, etc, performing various jobs in a production line for watches and movements.  One black belt level guy was right beside us (on the inside) and was adjusting a hairspring by 'feel'

I waved to him and asked to see his watch - it was a SARX055, not a GS!!??  I was surprised it wasn't a GS, but perhaps they don't get free watches by virtue of working there.  My hosts cheered in response to my knowing the model from a distance, so I won some cred right then and there.

After taking our time to watch everyone make watches, we went upstairs to another area.  Here we could try putting some screws in a 9S movement.  It's hard but my daughter and I each managed to get one in.  Master watchmaker us.  Then we had a look at some special models for sale only on location (none appealed to me, also didn't have 10k handy for a purchase).  Lastly, we stared at a version 1 Koro constant force tourbillion, in a big case.  Looked amazing but sadly couldn't get too close to it.

We finished off with a lengthy and fun chat with our hosts.  I even managed to get them comfy enough for a group pic without masks! They laughingly admitted they had time to kill since no other tours would happen for a month or more.  One little pearl of knowledge I found out was that yes, the GS group there makes some movements (8L35 and 8L55) for a separate group at Seiko. But like Bruno, we don't talk about that, and out of politeness I didn't pry.

This concludes another small tidbit from our recent trip - hope it was a fun read!

Bookmarked for further reading 😉! Awesome! Thanks for writing it up and sharing your trips!! 🍻 I will shall forever live vicariously through your posts 😁

Very nice write up and thank you for sharing.

ohh man sure its fun to read! thx for sharing man, i was hope you re getting one watch from that tour as a souvenier

Thanks so much, I appreciate you sharing. It’s unlikely I’ll ever visit myself, so it’s cool to hear a little about the factory.  Of course now I feel the need to hoard like $10k in case I ever get the chance to go. And nice Disney reference. Cheers.

Very nice write up and a very special experience. Wish I could pay them a visit next time I go to Japan!

thanks for confirming that the 8L35 movement in my SLA043 is indeed made by GS :). Curious to know if the case is hand polished there as well or just the movement.

A lovely story, thanks for sharing!

Great adventure! Thanks for sharing.  Enjoyed the read. Please share pics if possible

very cool, do you have a photo of the facility you could post?

Thanks for sharing. I’m still kicking myself for not looking into this the last time I visited Japan.

We had planned a trip for back in 2020 that got cancelled, and its unlikely we will have a chance to go anytime soon. We would have likely done the Ginza tour, not the Shizuku Ishi tour. I immensely enjoy living vicariously through your post! Thank you for sharing!

ohh man sure its fun to read! thx for sharing man, i was hope you re getting one watch from that tour as a souvenier

"We have tons of these things laying about - so here, take a free sample!"  was the ridiculous hope in the back of my mind.   I did get a nice bookmark however!  🤣

Great adventure! Thanks for sharing.  Enjoyed the read. Please share pics if possible

very cool, do you have a photo of the facility you could post?

I typed this at 3am on a hospital computer - so fails on many levels possible.  Just tried to add some pix here at home now that I'm awake.

We had planned a trip for back in 2020 that got cancelled, and its unlikely we will have a chance to go anytime soon. We would have likely done the Ginza tour, not the Shizuku Ishi tour. I immensely enjoy living vicariously through your post! Thank you for sharing!

Ginza was a hoot and holler.  Watch collector Mecca.  So many watch brands have ADs there and also many high end second hand dealers.  Seiko museum there as well as about 4 Seiko specialty dealers.  Will maybe post about that one of these days as well!