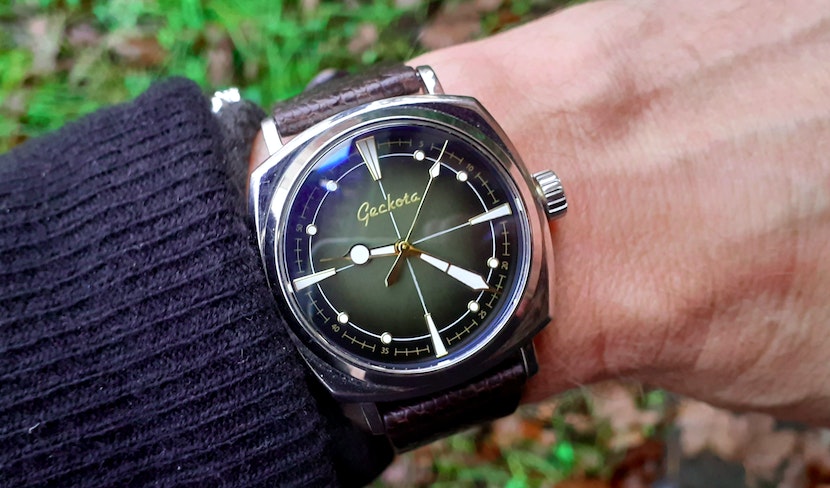 Today I'd like to review the watch that got me into this here rabbit hole. My late Dad's Tissot that had been on my arm since decades finally had to go to the watchmaker's for an overhaul. So I figured another watch to wear during the time (it took 6 months eventually!), and having an alternative, would be in order. I knew little about watches at that time, and typed "Seiko, used" into the Ebay search. And whaddya know, this Geckota was on the first page of the search (it was noted as having a Seiko movement), and my eyes went big. Wow. That was the coolest watch I had ever seen. I'm a big fan of retro-futuristic design, and this was a thing that wouldn't look out of place in the dashboard of a Harley Earl-designed Cadillac.

And the strap! Now Geckota is the watch sub-brand of WatchGecko, a UK firm that sells fine watch straps, and they splurged on this one with a unit made of effin' ostrich leg leather! How outrageously exotic can you go? It looks like lizard, but much knottier and thicker. Far out. Those babies cost a fortune, so having one as default - bingo!

I bought it. I felt like Sailor in Wild At Heart when I wore it. One man's ostrich leg watch is another man's snakeskin jacket :)

The watch is rated for 300m WR - but who'd want to get that wonderful strap wet? A cheap diver for the holidays would remedy that ... bam! Rabbit hole.

Anyway, back to the facks. The 14mm x 42mm slab-sided cushion case with 48mm L2L houses the ubiquitous Seiko NH35, hacking and hand-winding, and was rated for 300m WR, as mentioned - on Geckota's website; other than the brand name and the serial number, nothing else is inscribed on the watch. It has a slightly domed sapphire crystal with decent AR, and a screw-down crown with a pretty golden "G" inlay, drilled lugs and copious amounts of bluish-green lume. It's the only watch in my collection that equals my Panerai, lume-wise! What more can a man ask for.

The watch wears fine, even on my skin-and-bone 16.5cm wrist, due to the short L2L. Yes it's a big heavy chunk, but a bold piece like this sorta has to be.

What really sets it apart though is the dial. Not only the graphics with the cross-hair, or the unique hands (the hour hand reminds me of the "Alex" TV tower in Berlin :) It's hard to capture on photos in the winter light, but the watch looks different every time, depending on the light and how it hits it. The vertical brushing makes the dial change colour from golden olive to all black, sometimes the brand name disappears, sometimes only the golden hands and indices shine from the dark.

I have only one minor complaint about this watch. The cross-hair design is essential for holding the dial together visually. But, as it is very thin, it tends to disappear from far away, and the design loses coherence if viewed from across the room ... shock, horror!

Five years in, I still love this watch and wear it quite often, especially when the sun comes out.

Geckota still sells these, now under the "Pioneer" model name, with 200m WR and, alas!, no more ostrich legs. Sic transit. They also made a slightly smaller quartz model with a modified undercut case.

A very Panerai-homage quality on this one and I dig it. Great review.

Nice review of an interesting piece from my favourite strap suppliers.

Cool as .. watch, nice, love the dial. Geckota have made some great interesting looking watches,like I said cool 😎

The no date window benefit is clearly visible here.

That dial is marvelous!

So classical looking but timeless.

Thus is the first review I have seen for this watch. I'm getting the 200m version with honeycomb dial for my birthday in a few weeks. It really caught my eye and that 60s 70s space age design is so striking. Many thank for an excellent review!

ElTomstro · 3 weeks ago
Show us your kitchen timers!

ElTomstro · 3 weeks ago
The cow goes moo. The cat goes meow. How does your watch go?