A story about tossing a watch over a building. 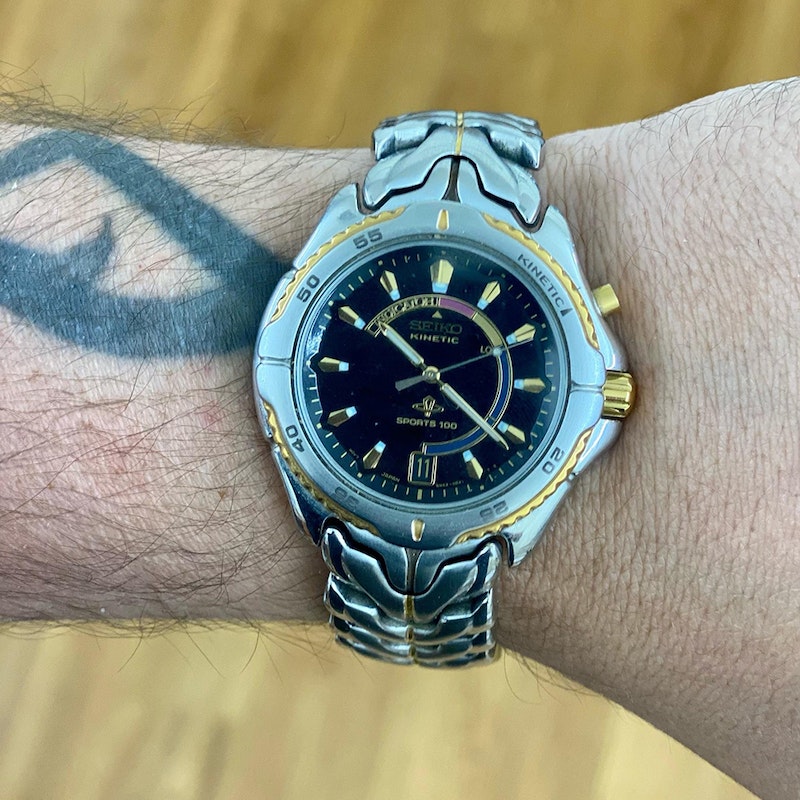 I have always said, I'm not really smart... but I notice things.

Growing up extremely poor some of the many things I noticed "rich" people did differently than people like us were not doing drugs, having reliable newer cars, being dressed in button-up shirts/suits, and also wearing watches.

To me, these people had responsibilities. They had places they needed to be at specific times. And in an age before smartphones, the watch was a tool... an investment in yourself as I saw it.

So, working for $4.10 an hour as a dishwasher and later buffet boy I saved up around $350-$400 to buy a watch I loved. It was so unlike anything I knew of at the time. It was a Seiko Kinetic... the first watch, that I knew of, that didn't need a battery and powered itself off the power of your movement.

I wore it every day with pride for years it seems.

One night, I had an argument with my mom. During the discussion she mentioned that I "always thought I was better than people"... she mentioned how I dressed (which caused some to be concerned about my sexuality lol) and my fancy watch.

However, to me wearing the watch, and dressing nice was my way of getting out of my personal showcase of poverty. It was a way for me not to accept my surroundings and strive to be more... an ambition that eventually cause me to leave my home forever and join the US Navy.

So in a fit of rage in that argument with her, I walked into the backyard and threw my watch over the factory that was behind my home. I turned around and said, "see, it's just a watch. It doesn't make me better or worse now that it's gone"... That ended the argument as we both were shocked at what I had just done.

Later that night I saw a few of my moms' friends out there with flashlights looking for it... but it was never to be seen again.

Having re-discovered my love of watches this year, I am glad to have purchased another copy of this watch recently. 25 years later, it now sits in a box with other watches costing many times what this did. Those fancier watches might be sold off at some point, but not this one. Even though it isn't the exact watch I tossed that night, it still holds a special place in my story.

Have you posted this before?  Maybe on WUS?  I remember this story because I have the same watch in full gold.

Have you posted this before?  Maybe on WUS?  I remember this story because I have the same watch in full gold.

I posted it a few weeks back in a facebook group before I joined this site.  I wore the watch today and it reminded me about the post, so i thought people here might enjoy it also.

I posted it a few weeks back in a facebook group before I joined this site.  I wore the watch today and it reminded me about the post, so i thought people here might enjoy it also.

Ah yeah that must be it.  Great story.

Wonderful story.  Congratulations on managing to shape your life the way you saw fit.

You must have a helluvan arm.

Great story! Thanks for posting and a really interesting watch! Did you move into G shocks or field watches in the navy?

Thanks for posting.  A Seiko Kinetic was my first 'serious' watch.   Loved it.

Great story, thanks for sharing.  Those Seiko Kinetics really were made for heavy wear, the perform best when worn every day just like you were doing.  In the end, its all just stuff and it is replaceable.  I also had to laugh at your comment on the clothes and sexuality.  This happened to me as well, my mother confronted me when I went out in cut off short, short jeans back in the day!

That’s a fantastic story! One can only better himself with his own ambition in the end…and it sounds as though you did just that.

What is the model number

What is the model number

Great story! Thanks for posting and a really interesting watch! Did you move into G shocks or field watches in the navy?

Actually, I didnt. I stayed with Seiko... but then moved on to Movado, as I saw that as "fancier" and then Momo Designs because I recognized Momo from my car enthusiast background.

Docfluty · 1 month ago
It's best if you don't know lol