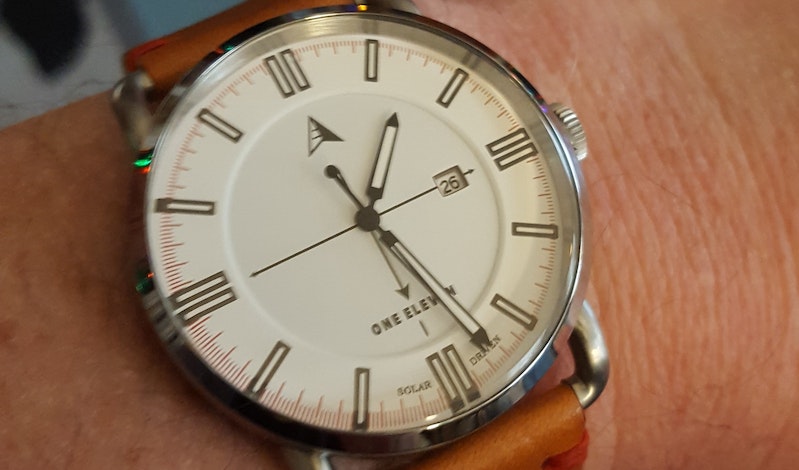 This is a watch I got when I first started collecting watches. I was really into solar watches when I first started collecting, even more than mechanical watches, and I searched out any and every solar model I could for a while. There are some solar watches I never got around to adding before I started with mechanical and automatic watches. Once I had moved to mechanical movements, I basically stopped adding solar watches except for certain special watches like my Seiko Arnie and my G Shock Steel. A couple of the brands I never got around to include Orient and Tissot. I think I still have an Orient solar panda in my Amazon cart that has been there for years. In addition to the numerous Casio, Citizen, and Seiko, which are the most prominent producer of solar watches, I have an Armitron, a Paul Peugeot (I actually gave this one to my granddaughter), several Timex solar models, a Bering my wife gave me, and this One Eleven SW1.

It was a watch from a brand I had never heard of; it turned up on a solar watch search on Amazon. I looked at the company website and tried to find out as much as I could about it before I bought it, but there was surprisingly little information about One Eleven available, and nothing about their solar movements. They were very secretive and protective of the solar technology they were using. The watch initially listed for around $100 or so, and I was going to pass on it as I couldn’t seem to find any information on the company or watches. When it went on sale for $55, I couldn’t resist, and I am glad I couldn’t. It has been a solid watch and is still working great. One Eleven also released watches made from recycled materials, but I believe they came out just a bit after I bought this stainless-steel version. I am not sure what has happened with One Eleven. I know they were bought by Fossil a number of years ago, and Fossil has started releasing watches very similar to One Eleven more recently, solar powered and recyclable materials.

The watch is constructed well, and the quartz movement is still running accurately. The second hand still hits the indices right on the mark. The crystal is mineral, not as good as sapphire, but it is slightly domed and has a nice, beveled edge that fits smoothly with the bezel. I especially like the anachronistic lugs that resemble wire welded to the case of a pocket watch. The strap is listed as genuine leather, but it is better quality than that would indicate. It is almost top grain quality with a nice finish. The buckle is also nice, having a roller tube that allows the strap to slide smoothly into place. It is also has quick release spring bars, although I have never changed the strap on this watch because the one that came with is so surprisingly good. The dial is a quadrant dial, and it has sort of a cartography vibe, as the dividers look like a compass rose. There are only indices and no numbers on the chapter ring, but it works with the compass rose dial divider.

I would like more information about the solar movement, as it is not nearly as good as claimed. It does not last nearly as long as an Eco-Drive, even an entry level Eco-Drive, and falls short of Seiko or Casio solar cells. It is similar in duration to Timex or Bering solar movements, lasting four to six months with a full charge. I was never really able to find out much about their solar technology, and I would have liked to know more. It is not like they were the only solar watch on the market.

In the end I am glad I got this watch, and I think it is a solid build, but I am not sure it would be a good value at full price, as you can get a Citizen or Casio Edifice for that price. It is a good value if you can find one for less than full retail. That is actually pretty easy on Mercari or eBay.

That's a good-looking watch, especially for an Amazon find.  I usually don't have the patience to sift through the utter nonsense they have just in case I can find something interesting.

DigitalDivider · 1 week ago
Had to Get an Armitron Tetra for My Digital Collection!