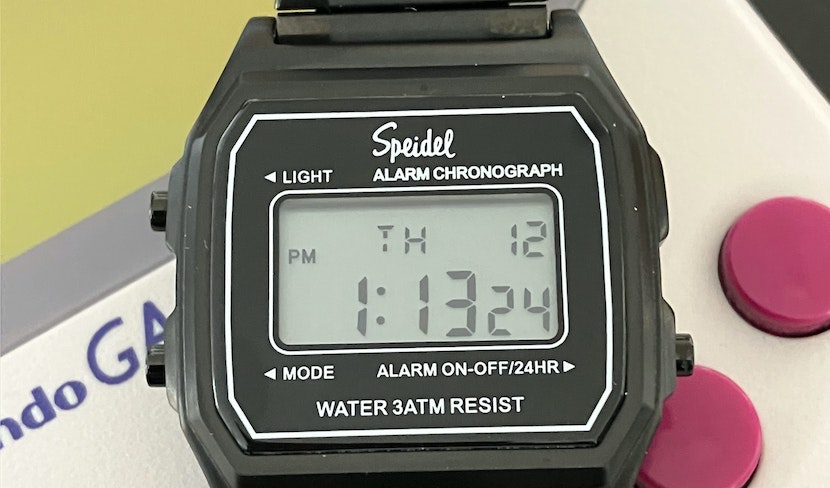 Memories are fascinating. They not only include visuals of one’s interpretive past, but also smells, temperature and emotions…all rolled into an amygdala-stored burrito.

One such memory occasionally emerges of an afternoon around 1981 where I was frantically-gesticulating to my mother…pointing at an advert of black resin digital watches that were equipped with 1/100th second stop watches with alarms and hourly chimes. I wanted one so badly to compete with my friends who already owned such treasures.

My mother, as the show-off she was, reciprocated by buying me not just a black resin digital watch, but an all metal silver-tone Criterion-brand watch that played Fur Elise as its alarm melody. “This watch cost 100 dollars!”, she bragged, to make sure all knew how magnanimous she was. Don’t get me wrong…it was a beautiful and dependable watch I owned for years; but, it only had a 1/10th second stop watch and did not have an hourly chime!

So, forty-three years later, I finally found a watch that has the best of both worlds: all steel case and bracelet in PVD black, a 100th second stopwatch…and an hourly chime!

It’s heftier than a resin watch too and benefits from classic dimensions sure to please most people:

My memory burrito has been satisfyingly-dined upon with the purchase of my new Speidel. Better yet, there is no need to brag about how much I paid for the watch…because it only set me back $42.83 including personalized engraving on its caseback! Oh…the memories!

A great review and back story!

I have several casios and a timex digital bur I have never heard of speidel?

I don't recall them being sold here in the UK?

A great review and back story!

I have several casios and a timex digital bur I have never heard of speidel?

I don't recall them being sold here in the UK?

They’re out of Rhode Island and date back to 1904. They are probably best known for their expansion bracelets. I also own a railroad style watch from them and really love it!

Thank you! All new to me...another brand to learn about!

Yeah, I ordered the M/L (middle size) and it fits snug but comfortable on my 7 1/4“ wrist.

Yeah, I ordered the M/L (middle size) and it fits snug but comfortable on my 7 1/4“ wrist.

Oh, that's right, it's band length. not case size. I forgot about that.

Time dictates my linear path to its bitter end. My watches keep me one step ahead of time...and bring a bit of flavor to my daily duties.

DariusII · 4 days ago
My New Clock. Show Us Your Alarm Clock!

DariusII · 6 days ago
The Ironman Shock is Better than the Standard G-Shock. Change My Mind.