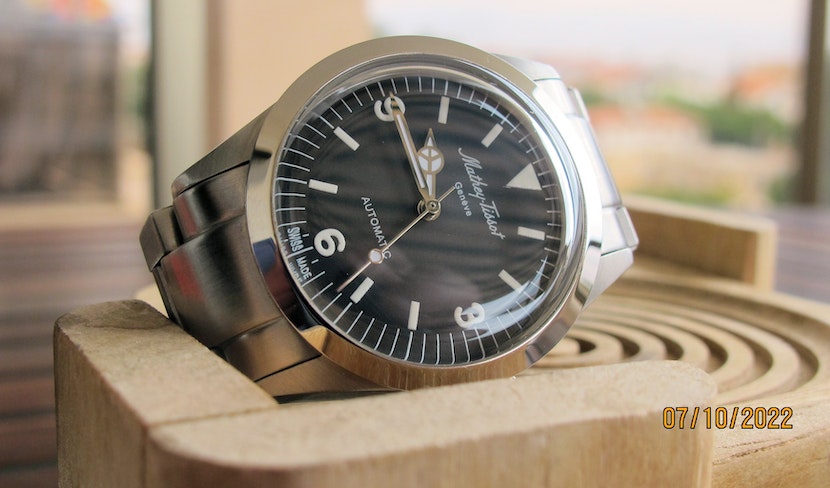 The MT369 is the fruit of a collaboration between AMWG (Asia Mechanical Watches Group) and Mathey-Tissot. AMWG is a Facebook group with about 50,000 members, mostly from Hong-Kong and Macao. Mathey-Tissot is now an Italian owned independent Swiss brand with an interesting history. Established in the late 19th century, it was known for manufacturing chronographs for the US army during WW1 and is also rumored to be one the manufacturers of the Type XX/XXI chronographs for the French air forces after WW2.

This is not the Explorer you are looking for.

The MT369 is not a 1016 Explorer clone. When AMWG decided to collaborate with Mathey-Tissot they chose to re-create a rare and obscure version of the Rolex Air-King that was sold in the late 50’s with an Explorer dial and Mercedes hands. I’m not a Rolex expert, and therefore I’ll have to trust reviewers and articles that named this model as the 5500 Explorer or the Air-King Explorer. The most visible difference is the profile of the case with a flaring bezel that the MT369 re-create very nicely.

This flaring bezel extend the visible diameter of the MT369 from 34.5mm to 35mm and introduce some less noticeable changes in the dimensions and ratio of the dial elements. The case still has the Oyster general shape and profile, but the lug-to-lug distance is just 42.5mm, with a total height of 13.4mm, including the boxed crystal that mimics the acrylic on the original 5500 Explorer. Taken all together, it become clearer that the MT369 is not a 1016 Explorer clone.

The afore mentioned crystal is made of mineral glass that is supposed to be sapphire coated. I’m not sure what this mean exactly since checking with my diamond tester shows the same lights as when I test other mineral crystals. However, despite being one of my more frequently worn watch, the MT369 crystal is still free of scratches, so perhaps there is really a sapphire coating there for protection.

The crown is signed with the Mathey-Tissot entwined MT logo which resemble a peace sign, however despite having a screw-down crown the MT369 rated water resistance is listed as 50m only. This is more typical of field watches and while I do realize that the original 5500 Explorer probably had an even worse WR, I still expect a modern watch with a screw-down crown to do a bit better.

But it’s still an Explorer (with a twist)

Considering its name, the MT369 is unsurprisingly a 369 Explorer style dial watch. The dial background is a dark charcoal colored and textured, with a printed minute’s track running along the perimeter and printed indices and text. The text is blissfully kept minimal with the name of Mathey-Tissot in cursive letters on top just below the inverted triangle index at 12 o’clock, Genève is printed under it, and on the bottom of the dial, over and under the 6 numeral we can read that it’s an automatic and Swiss made. The print is fine and crisp and I admit that I prefer printed over applied for Explorer style dials, in my eyes it just looks better than the tarted up dial of the newer models.

The indices and hands are lumed, but the color of the hands on my first edition MT369 is noticeably whiter and it doesn't match exactly the color of the indices. It’s still better than the fauxtina used for the second edition, though.

The mineral crystal does a good job at emulating the distortions of a vintage boxed acrylic, and considering the price increase of a boxed sapphire I find this compromise to be acceptable.

The hands are flat and polished, their finish is good but not spectacular, there are no burrs or rough edges, but they are also not honed to perfection like on a true Explorer. The hour hand is decorated with the MT logo instead of the usual 3-pointed Mercedes star making it look as if there is a small peace sign on the hand. So even here the MT369 looks like an Explorer, without being an Explorer copy.

I could not find any detail on the lume used. It appears white during daylight and glow green at night. It's kind of an OK lume but not in the same league as Seiko, therefore the MT369 would not be my choice to wear if I'm ever invited to a lume fest and want to make an impression.

The back of the case is pretty much sterile. The screw down cover has a coin edge with a polished rim surrounding a blank brushed center. The only text to be found is a light engraving on the rim informing us that this is an "Asia Mechanical Watches Group Exclusive".

The bracelet is a mixed bag. On the plus side it's very flexible and its brushing match the one on the watch case. I also happen to like the look of the external links. The negatives are the use of male end links (although it can be argued that's it's not really a problem with a 42.5mm L2L), a clasp that is tricky to close and lock unless pinched firmly from both sides, and a very finicky system of using minuscule screws that are prone to detach and get lost. The problem is so well known that it is advised by AMWG to use Loctite to lock the screws in, which I did and I still managed to lose two of them on separate occasions.

The clasp is milled steel and has the MT logo engraved on top. Still, despite the double pushers it doesn't lock well and may deploy suddenly. There are also only 3 micro adjustment positions and no half links. This and the tiny loose screws are good incentives to look for alternatives, luckily the vintage design stopped at the lug's width which are sized at a more modern 20mm.

The movement inside is a Peseux MT224. it's claimed to be Swiss but nothing else is known or published about it. My guess is that it's an ETA clone and the 38-40 hours of power reserve combined with the 28,800 BPH and the ghost date position seems to support this guess.

On the wrist the MT369 is a pleasure to wear, at least on my wrist. I love small watches and tend to prefer them in the 36-38mm range, which is why I jumped at the occasion to get the MT369 the moment it was made available on the AMWG online shop. The 34.5mm case size of the MT369 together with its ultra flexible bracelet are a very good match for me, better than the 36mm Smiths Everest to be honest.

My conclusion is that the MT369 is a very good re-creation of a vintage Explorer that didn't fall into the trap of cloning a 1016. Its main faults are a bracelet that conspire to send the watch into free fall, and an unknown movement that might be difficult to service. It's also sold only through AMWG online shop and they ran out of stock some time ago. Mathey-Tissot days of glory are long past, and like Bulova it's better known today for manufacturing quartz watches, but the MT369 is definitively a watch that deserves more recognition.

Excellent read and review as usual. Thank you🤝

Great review and an interesting watch I never heard of before

Great review and an interesting watch I never heard of before

There are very few online reviews of this model, except for the Time Bum that published a written review in 2021 and I believe that @watchchris did a video on his YT channel. It was also sold exclusively through the online shop of AMWG Facebook group, therefore it's no wonder that you never heard of the MT369 before.

Mathey-Tissot? Well they are a "has been" brand pretty much like Bulova. It's an old brand that used to be popular and they manufactured decent watches but were completely devastated and gutted during the quartz revolution. Like Bulova they fell into obscurity and are now better known for selling cheap watches online or at retail stores.

They recently collaborated again with AMWG to re-issue a SW based manual wind Type XX chrono and it was sold in a blink.

Catskinner · 1 hr ago
Thunder and Tangerine, and a cat.

Catskinner · 2 days ago
Moving through extremes