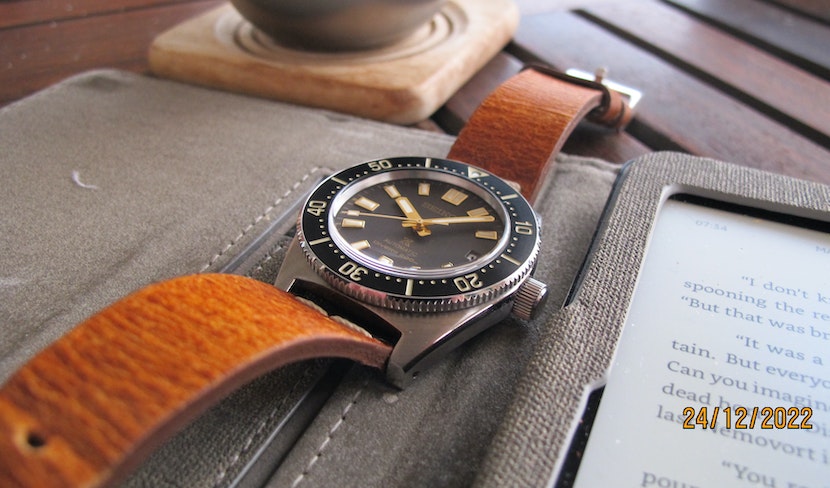 Review: ColaReb Roma - The SPB takes a trip to Roma.

The Roma strap from ColaReb is a special case because it practically saved my SPB147 from turning into a drawer princess. I had high expectations from this watch, I even went to an AD and tried it on before committing to a buy and it still resulted in the shortest honeymoon I ever had with a watch. Most of the reasons for this can be drawn from the review I wrote on the San Martin SN007-G-X that turned to be a better 62MAS, and there is also the not funny at all predilection of Seiko for messing the bezel’s alignment on their watches.

But this is about the Roma and ColaReb.

I first learned about ColaReb from a TGV SOTC video and decided to give it a try with the (now discontinued) Perugia that replaced the horrid faux-croc strap on my SARB017 Alpinist and I also bought the Roma, thinking that one of them should fit the SARB. The Roma never had the opportunity to fit on the SARB because I thought that the Perugia was perfect and I didn’t want to bother removing it since it lacked quick release spring bars.

Experiencing first hand the craftsmanship of ColaReb was a good enough excuse to prompt me to buy more straps that eventually found their match on the Dan Henry 1962 and the Yema Wristmaster. In the meantime the Roma was left untouched until I got fed up with the SPB147. This time the problem I had with it was its original rubber strap.

I don't remember which YT reviewer mentioned it first on a review of a Seiko diver's that was fitted with a similar strap that the keeper and buckle dug into his wrist. I may be mistaken but I think it was @PeterKotsa. It happened to me as well because the keeper found itself positioned just above a soft spot on my wrist and being made of inflexible metal it started to dig in. As for the buckle, it was too wide for me and it curved too sharply downward and therefore its edges found many uncomfortable points of contact with skin. At this point I decided that I had enough with this failed 62MAS diver.

It was at this stage that I started to think about desk diving. After all, I don’t dive anymore, I don’t really need a 200m certified diver and I already have a better 62MAS. So, why can’t I play on the SPB147 strengths and dress it up to emphasize its stunning chocolate sunburst and gilt dial? Just for the fun of annoying more people online, why can’t I commit the unspeakable and fit a leather strap on the SPB and further the crime by selecting a strap that is obviously unsuitable for any activity related to water. Digging a bit into what I had available revealed the Roma and I though...why not?

The Roma is part of ColaReb’s vintage collection and has a rugged and aged top with a calfskin leather lining. Despite the rugged look, its supple enough to wrap around my 6.5” inch. However, with a thickness of 2.8mm the Roma is not a thin strap.

The Roma has double stitching near the lugs, I think that the stitchings are made of linen, but they could just as well be made of cotton. I didn’t experience any color transfer from the leather, which speaks well for ColaReb’s tanning process. There are also stitching on the two keepers, with the one closest to the lug secured with a string to the buckle. I guess it’s there to prevent it from wandering too far, but it’s also a limit on how much it can hide the tip of the opposite strap.

The buckle is brushed with a flat underside, meaning that it’s a good match to the SPB finish and that it doesn’t dig into my wrist.

The look of the Roma is definitively on the rustic side of the scale. It's a look that suits me and my SPB and I discovered that the top creases a lot. Most of the creases runs horizontally and add a lot of character to the strap. I think that it’s on purpose because it gave the SPB the look of a watch that’s been worn for ages, instead of a new model that is barely two years in my collection and worn occasionally. However it only look nice when the creases runs from one side of the strap to another side. The danger of creasing leather is taht a vertical crease or scratch running from the buckle to the lug will ruin the look.

With the creased leather and fabric stitching the Roma is also not a strap that you want to get wet. I’m assuredly don’t intend to and will keep the SPB strictly on a diet of diving into desk drawers and the closest it will ever get close to liquids is when I refill my fountain pens. The Roma strap was a great success for me and I believe it may have the potential to save other problematic watches.

Review: ColaReb Roma - The SPB takes a trip to Roma.

Thank you for the review! I never understood the two fixed keepers on the these straps, I freed one keeper on all my Colarebs by cutting it loose.

Thank you for the review! I never understood the two fixed keepers on the these straps, I freed one keeper on all my Colarebs by cutting it loose.

I think there are two possible reasons. It does keep the first keeper in place and prevent it from sliding away once the strap is buckled, or it's to ensure the keepers don't get lost when the strap is removed from the watch and stored.

Catskinner · 2 days ago
A white face in the sun