The mechanic from below - keyboards and watches 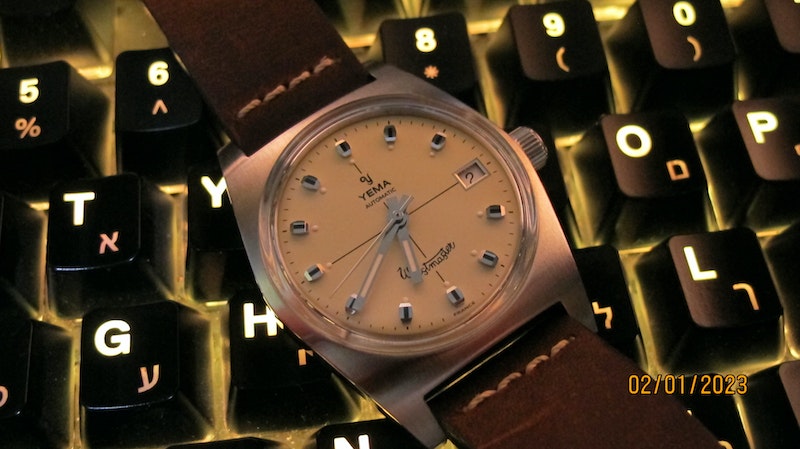 I have to admit that I have a mechanical fetish and it's not just about watches. I love mechanical keyboards and for years I used an IBM XT extended keyboard, switching to a better one from Zenith when it died (yes, they did manufacture PCs at some point and their FTM CRT monitor was awesome). I love the responsiveness of the keys and their soothing background clickety-clack when I type. It also annoys my co-workers at work, which is always a plus.

This one, like the featured Yema cream dial Wristmaster is a bit more modern than the old IBM keyboard. It has multimedia functions that I don't use, and an awesome illumination which I do.

This illumination is customizable for light colors and patterns, going from an epileptic seizure inducing disco show to a more soothing steady background backlight, which I decided to use for another session of indoor watch photography because I was too lazy to move outside.

The case of the Wristmaster is polished to a high gloss on its sides and has a fine brushing on top, this led to some interesting reflections from the keyboard. Somehow the Canon G12 captured the background light as yellow cream while in reality it's a lime/green hue.

On the other hand, the boxed acrylic crystal is paying dividends by being free of reflections which enabled it to soak up the light from the monitor without losing its clarity. I think it's the combination of light coming from below and above that confused the sensor of the camera, but it somehow captured the cream color of the dial correctly. Interestingly, it did capture the exact warmer reflection from the case brushed top too, so maybe it's just that the G12 has problems with green, or it's just allergic to citrus.

On the wrist the Yema Wristmaster is still a pleasure to look at, especially the effects caused by the tall boxed acrylic and the dial that features the original looking indices that are accented with small black dots.

Catskinner · 4 days ago
Kickstarting the day with a Kickstarter Yema