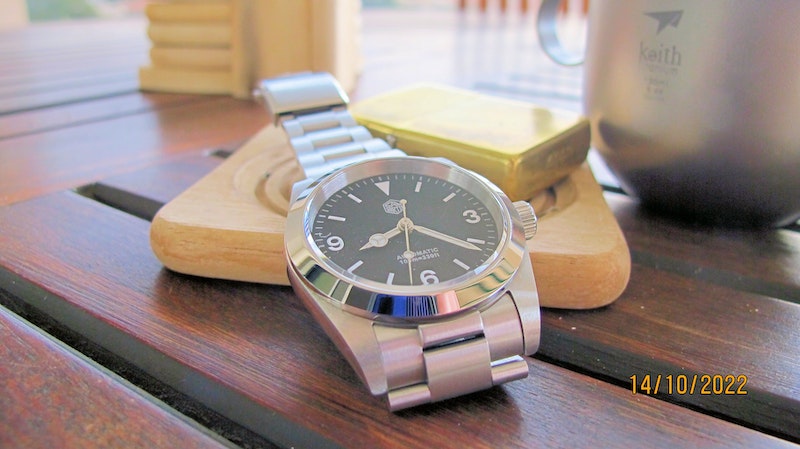 The San Martin SN021-G is an OK watch, and is kinda like an Explorer but that's not the reason why it's interesting.

It's decently made, the finish is nowhere near as good what you may have heard in some reviews but it's good enough in all the areas that you see or frequently touch. Mine has a PT5000 inside, but other versions had either Seiko or Orient movements, they are all fine and not very interesting.

It's interesting because in my eyes the SN021-G is a perfect case of reversed Chinoiserie. During the 17-18th centuries a lot of art that incorporated Chinese motifs was mass produced in Europe, and sold to people who obviously never held a real Ming dynasty vase in their hands. The artisans of that period were engaging in what we would call today "homaging" Chinese art and craft and it sold well in Europe if it just looked a bit like what something from China might look like, as long as you didn't mind that it actually didn't look like that at all.

And so, 300 years later we see a situation reversal where a Chinese company manufacture a watch to sell in the West and it looks somewhat like an Explorer, except that it doesn't really look like an Explorer at all once you start to dig into the details.

I bought mine with a painted dial since I think it's a better match to this type of watch and I'm not ashamed to admit that I do like it, that I'm not bothered at all it's a pastiche, and that it wears nicely on my wrist.

A valid point your making,the boot is definitely on the other foot. And I'm sure a lot of us have got willow pattern plates and 'ming' vases all made in the peoples Republic of staffordshire. Good post👍

A valid point your making,the boot is definitely on the other foot. And I'm sure a lot of us have got willow pattern plates and 'ming' vases all made in the peoples Republic of staffordshire. Good post👍

The SN021-G is not a bad watch, it's just that when I saw it on reviews it got me thinking that it looked just like someone tried to recreate a generic Explorer from second hand information without having ever held a real exemplary in his hands. It had so many parallels to the trade of Westernized "Chinese" arts and craft that it was hard for me to miss it and there is the irony in the situation of course.

I have one with applied indices and a Sellita SW200. It's one of the best finished watches I've seen. Definitely above the price.

Valid observation. I actually like both: Chinoiserie (esp. from the 18th century) and San Martin. Maybe I should get myself a nice folding screen...

My grandmother had wood coasters like that in the 90's.

My grandmother had wood coasters like that in the 90's.

She was probably homaging mine which are from the 80's.

Catskinner · 50 min ago
It's getting colder

Catskinner · 13 hrs ago
A trio of Explorers - which one is the best?

Catskinner · 1 day ago
Thunder and Tangerine, and a cat.