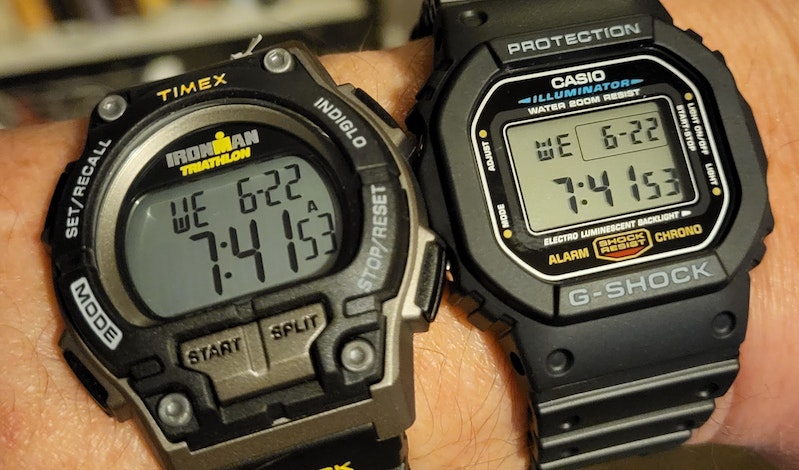 I Did My Best To Destroy These Two Watches. Was It Worth It? Timex Iron Man Vs. Casio G Shock

This will be less of a review and more of a comparison of two of the best budget survival/sport watches on the market, the Casio G Shock and the Timex Iron Man. For this comparison, I will be using the G Shock DW5600 and the Iron Man Triathlon T5K195. These two watches have similar functionality and tolerances, and they are close in price, both being widely available for less than $50.

Now I could do the usual comparison of features and functionality, design, and wearability, and create a list or grid comparing the various features: the G Shock has a smaller profile…yada yada yada…the Iron Man has a more readable display…blah blah blah…the Indiglo backlight is superior to the electro-luminescent backlight…homina homina homina…the Casio has 5 alarms…on and on and on…the Timex has 99 split time laps…back and forth and back and forth…the Casio has a more comfortable strap…etc. etc. etc.; but that would be really boring, and wouldn’t answer the real question. There are differences between these two watches in terms of functionality, but they are small differences of degree, not large differences of kind. The real question is which of these watches is actually tougher. This comparison will be a comparison of survivability.

I have designed a series of tests to compare the ruggedness and durability of these two watches. The first and most obvious test was the impact test. Both of these watches feature the word and claim Shock prominently on them. But I wanted to do more than a simple drop onto a hard surface. No, this test was dropping a brick onto each the watches from a height of 3 meters. The watches were set face down on a concrete sidewalk for this test and the block was dropped once per watch. You can see the pictures of the watches after the first test.

Both watches have suffered cracked crystals from this first test, although the Timex cracking is worse than the G Shock. However, as you can see, the G Shock suffered a spring bar failure. I was able to reattach it, but it still failed. The Iron Man has worse crystal damage, but the G Shock might have been lost owing to the spring bar failure. I have to give this round to the Iron Man even though it suffered worse damage to its crystal. It would still be on the wrist. On to the next test.

Well, the watches spent the night in the freezer, as the second test is a low temperature test, although I did pull them out before the entire 24 hours had passed. This test is not very extreme, but it is the best I could come up with during the summer. As you can see, both watches are still running and covered with frost. We will call this outcome a wash. Both watches survived with no additional damage.

My wife has been wearing them while she was gardening for an hour or so. I switched the watches on her feet halfway through this test. She just finished up with her gardening. You can see how the watches look after I knocked the majority of the dirt off. They both are still running, although the Iron Man was switched to the stopwatch, and I had to switch it back. Both watches have survived this test…we have another round without a clear winner.

They are rather dirty now, as you can see in the picture, so for the next test, I wanted to clean them up and test the water resistance of these watches. I am not certified to dive, so I had come up with a test that I think would simulate the conditions on a dive and would clean the watches at the same time. They are in the washing machine with a load of laundry right now, cold water, long cycle, and soap. I will be moving on to the last test once the washing machine is done.

Ahh, nice and clean. As you can see, both watches survived the washing and are still working, although the Timex was again in chronograph mode when I pulled it out. Wonder if something happened to the pusher? We will see when they come out of the next test. For now, I am going to give the win this round to the Casio as this is the second time the Timex has been put into a different mode.

Now, I could have let them air dry, but where is the fun in that? Instead, I am drying them for the final test. They are in the dryer right now with the load of laundry. I can hear them knocking and rattling in the dryer even as I type this. Be back with the final results in a little over an hour.

I ran them through a short low cycle in the clothes dryer to see how they would stand up to hot conditions. Here are the final photos of the test. As you can see, both watches survived but did suffer some damage. This time the Timex was still in time mode and hadn’t switched over to chronograph. However, after the dryer cycle, the G Shock is dry, but the Iron Man has condensation under the cracked crystal. Ladies and Gentlemen, we have a winner!

In the end, I did see difference in the outcome. The G Shock survived better, and the difference is not negligible, even though it is the one that had the spring bar fail, because the Iron Man let water in under the crystal. Also, the Iron Man may have an issue with its pushers owing to it switching to the chronograph during the third and fourth tests. At the end of all this, I am no longer stuck between these two specific models, and I will give the overall win to G Shock, not because of solar power and a host of other functions in higher price models, but at the entry level, because there was a significant difference in performance and durability. Honestly, you can’t go wrong with either of these watches despite the G Shock pulling out the win at the end.

Now for the fun part. Who would like one of the two watches I used for this test? Post a response letting me know which one you want and why you want it, but be warned, you will need to finish convincing me to give them away. I am ambivalent about giving them away; I want to share the fun with a couple more members, but I also want to keep my research results. The best answers for each watch may win. Keep in mind that I just gave away four watches for my 7 Watch Challenge, so it might not be easy to convince me to share more. I am a collector after all.🤣

I Did My Best To Destroy These Two Watches. Was It Worth It? Timex Iron Man Vs. Casio G Shock

Candide3693 · 2 days ago
Islander Breaks New Ground with the Bayport!

Candide3693 · 2 days ago
My Wife Is The Best! Early Birthday Present!