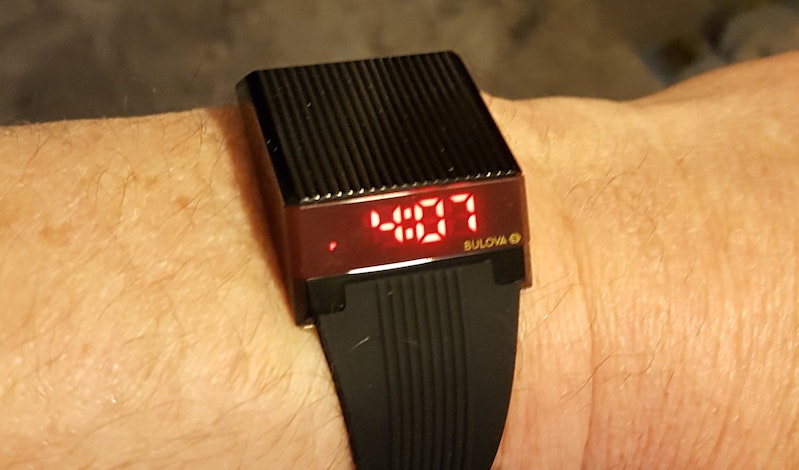 Case Back: steel with battery door

This one is not really an overlooked watch and has gotten plenty of attention since its release, but I wanted to offer my take on it. I have had it for about a month or so now, and I am still enjoying it immensely. This is a recent offering from Bulova in their Archive Series, resurrecting iconic watches from Bulova’s rich heritage. The Archive Series came into existence based on the success of the Lunar Pilot, the quartz reissue of the prototype worn by Dave Scott on the Moon and sold at auction recently for over a million dollars. Other watches in the Archive Series in addition to the Lunar Pilot and the Computron include the Oceanographer, or Devil Diver, the Mil Ships, the Chronograph A, and the Chronograph C. Interestingly, neither the Hack nor the A15 Pilot are included in the Archive Series, despite being similar reissues. I am not really sure why the Mil Ships is included in the Archive Series when the other military reissues are not.

Where the other watches in the Archive Series are iconic tool watches, the Computron is most definitely not. This is a watch I bought because it is fun. Not a particularly practical watch, it is not really that tough or resistant either. Doesn’t have a ton of functionality, and not particularly dressy. And there is that odd trapezoidal shape coupled with a 14mm height at its peak, preventing it from easily slipping under a cuff. Nevertheless, it is really comfortable to wear, owing to a soft rubber strap (I cannot speak to the comfort of other two models with bracelets). I am thrilled to own it and would heartily recommend it to anyone with even the slightest sense of whimsy, especially if you can get it for less than the retail price of almost $300. That is the biggest negative about this watch but finding one for less than that isn’t difficult.

They can usually be found for well below MSRP. Brings back memories of my first digital-a Texas Instruments model.

They can usually be found for well below MSRP. Brings back memories of my first digital-a Texas Instruments model.

Thanks! I also had a TI LED watch in the '70s; a gift for Christmas when I was a kid.

Candide3693 · 22 min ago
Anyone looking for an Applewatch?

Candide3693 · 6 days ago
New Yema Digital Find! Wondering why it was so cheap (less than $35 including shipping). Anyone have any ideas?