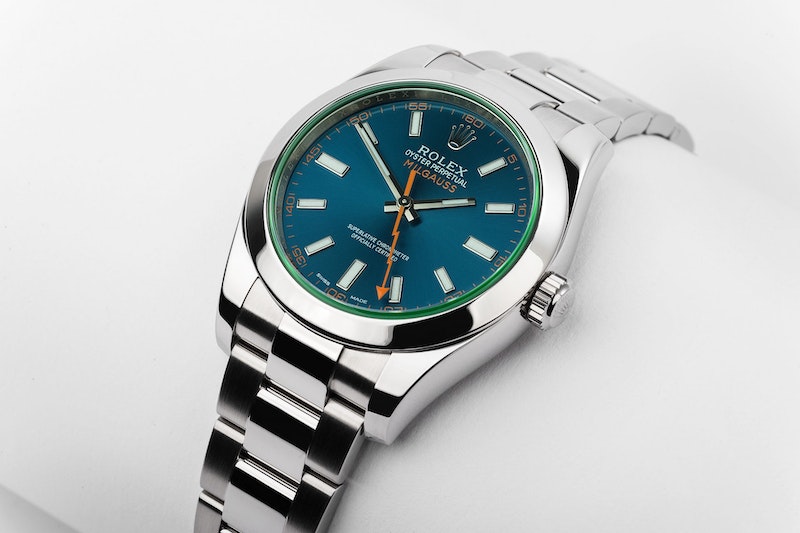 The Rolex Milgauss is often considered the “Rolex for people who don’t like Rolex”, and that was generally true for most of this timepiece’s history. Introduced in 1956 by Rolex as a tool watch for owners with a very specific workplace hazard – powerful magnetic fields that can negatively affect a watch’s ability to keep accurate time – it received very little attention in the Rolex lineup. Utilizing a faraday cage inside the case to protect the movement from magnetic fields, it was able to withstand 1,000 gauss (hence the model name), a first of its kind when originally introduced. It wasn’t until the third generation Ref. 1019 Milgauss that the watch was turned into the stainless-steel sports watch it is today and remained that way until 1988 when Rolex ceased production, with many thinking the model would never be seen (or needed) again.

In 2007, Rolex shocked the horological world by reintroducing the Milgauss. A clear descendant of the previous generation, it has a slightly larger diameter at 40mm (versus 38mm of the previous generation) and returned the lightning bolt second hand and orange markers from older generations. This was also the first time Rolex utilized their propriety green tinted sapphire crystal. But it wasn’t until 2014, when Rolex introduced a blue dial “Z-Blue” variant with green sapphire crystal, that the Milgauss became the highly sought-after timepiece it is today.

To say consumers loved the Z-Blue dial would be an understatement. While we don’t know how much better the Z-Blue dial sells in comparison to the other offerings (Rolex keeps sales figures close their vest), second-hand markets have put a significant premium on the blue dial variant, reflecting the increased demand for this model. But anecdotal evidence (read: the Internets) points a level of interest well beyond the original releases that ultimately led to the Milgauss’ demise, and something that is sure to keep the series around for the foreseeable future.

And that is why the Milgauss, should be retired once again.

As a tool watch, the Milgauss has been rendered obsolete by competitors that are able to best the watches antimagnetic properties through use of special metal alloys and silicon in their movements. The Omega Aqua Terra, for example, is certified to be resistant up to 15,000 gauss, and it achieves this feet without the need for a faraday cage that adds unnecessary heft and size to the case. Rolex needs to come to terms that the Milgauss is a stainless-steel sports watch with antimagnetic properties, and not the tool watch that was initially intended. Using the same antimagnetic methods as Omega, they could easily achieve a higher antimagnetic rating of the movement and achieve a sportier case profile.

On the wrist, the bubble-back case of the Milgauss gives the perception that the watch is much larger than its 40mm diameter would suggest, and the excess weight makes it feel almost sloppy on the wrist. In contrast, the Omega Speedmaster comes in a slightly larger case, but melts into the wrist, providing a much more comfortable wearing experience. And it does so with the addition of a chronograph and same 15,000 gauss rating as the Aqua Terra. Owners of large dive watches may feel comfortable with the Milgauss, but as a stainless-steel sport watch, it feels out of place and time.

The true appeal of the Milgauss is the Z-blue dial, which, if we’re being honest, would look equally magnificent in an Oyster case. The current Rolex buying craze aside, one must wonder if the Milgauss would even be considered a coveted watch if it wasn’t for that blue dial. And if that dial is the most compelling part of the watch, there is no need for it to carry an entire model range on its shoulders.

There is some discussion, persistent for several years, that Rolex will introduce a new version of the Milgauss in 2022. Instead, they should consider ending the Milgauss line (again) and let the name fade into history. I would much rather see Rolex add the Z-blue dial option to the Oyster Perpetual line (preferably in a re-introduced 39mm size) with the same Z-blue dial and have a fantastic stainless-steel sports watch and wears as nicely as it looks.

The Z-Blue was the watch that I always noticed first in any display of watches, whether in a mall AD’s window or in the display cabinet.  I love its brightness and colours.

Unfortunately, and as described above, it feels like a giant brick on my wrist.  I have tried it on many times (when Rolex were freely available to purchase from ADs) but could never pull the trigger.  Maybe, maybe now that I’ve been wearing a BB41, it may not feel so awkward and out of place on my wrist.  If I could even try one on again.  LOL

As someone who owns a Milgauss I disagree with some of this. I think it holds a certain charm, and actually the weight and size of it are part of the appeal as to why I picked one up. Maybe I am the non-Rolex fan it appeals to?

Unfortunately, I don’t have the Z-Blue, but with the slight green tint to the crystal I think it looks a little odd myself.

I have no real opinion on whether Rolex will discontinue the Milgauss and how I feel about it; I’m not in the market for one so scarcity is not an issue, and I’m not selling it any time soon so whilst it’s nice if it gains significant value it’s not an investment to me. It’s a watch.

I think the original 6541 is the best one they've made! I've been lucky enough to see both that ref as well as the modern ones and i have to say the black honeycomb dial does it for me.

Just personal preference, but black dial with green crystal and the white dial with clear crystal are the desirable models for me.

I was never a big fan of the Milgauss until I saw a Z-Blue out in the wild recently.  Sometimes seeing a watch in person changes your whole perception about it.  I thought it was awesome.

BlueDial · 3 months ago
How Do You Store Your Extra Bracelet Links?