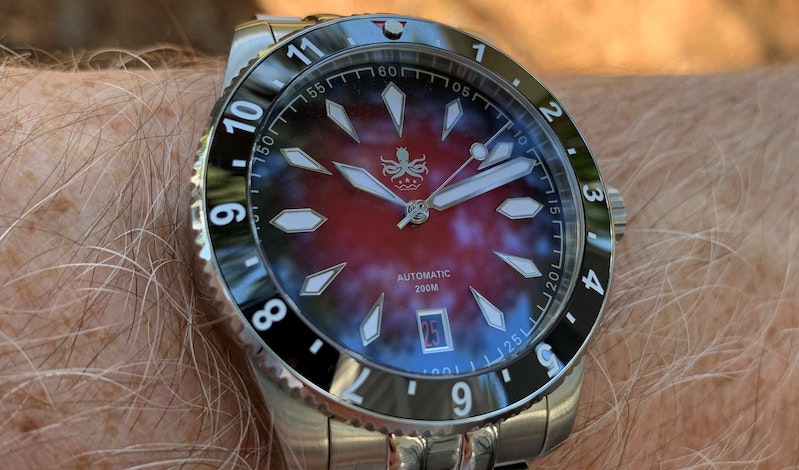 My history with dive watches is not encouraging.  My very first watch, given to me when I was six or seven, was a mechanical boy’s size dive watch with a black dial and bezel. I remember the black perforated rubber strap getting really funky in the summer.  I don’t remember the brand. By the time that I was nine I was wearing an old Timex of my father’s. The watch stopped running and sat in a drawer until my son was six or seven. At some point it had lost the bezel. I took it to a watchmaker to see if I could get it running.  Alas, that is when I learned that not all mechanical watches are worth saving. A no jewel pin pallet boy’s diver (without bezel) from the early 1970’s apparently was not worth fixing.  I wish that I kept it, but to the landfill it went.

My second dive watch was a dive watch in name only.  It was an early 1990’s Fossil that my sister-in-law bought me with her employee discount. It had a fixed bezel, and you could wear it to wash your hands.  It looked the part, but it ate batteries at an alarming rate.  After one three-month battery stint I consigned it to the landfill also.

For most of the last fifteen years I have worn mostly vintage watches that could be described as “dress watches”, a term that I abhor. They are refined and elegant (mostly).  One thing that they are not is rugged. I have wanted a versatile sports watch for those rare bursts of physical activity.  Although I have become more sedentary, I still enjoy the occasional hiking, swimming, or camping experience.

When this site was still newish @celinesimon  put up a post comparing various blue dial watches.  I dutifully scrolled through many internet pages of blue dial watches in order to form an opinion that would justify a response to the post.  I found myself looking at red dials.  To date, I do not own a blue dial.  I had green dials before green became the “It” color.  I have a yellow dial. I have brown. Red fascinated me.  I don’t understand the fear of bright colors.  I wear red ties. A red dial became the next fixation.

I could have found a red dial on a “dress watch”.  Islander makes an affordable version.  Seiko Presages are pretty.  However, I have covered the waterfront with watches that will fit under a suit jacket cuff. Divers it was. I decided to keep my expenditure low. After all, this watch was going into a rotation that meant it would only see a few days a month. Also, I am frugal, which is to say cheap.

After months of internet searching my choices centered on Orient, Zelos, Phoibos, and Spinnaker.  There are other red dial divers out there, but too many choices cloud the mind.  Finally, it was down to the Orient Kamasu and the Phoibos Voyager.  I liked the dial of the Spinnaker least.  I could not justify the additional cost of the Zelos (more on that later).  I liked the Phoibos dial better and felt that I did not need another day/date combination.

Oh, and I love this dial.  The computer mock-ups make it look burgundy, but it is not. It is a rich crimson that fades to black towards the chapter ring. In sunlight it is a deep pool of red. By contrast, Spinnaker and the Velo Open Water are flat.  The dagger indices add interest and give the watch a slightly vintage feel (dagger indices had their day in the 1950’s before giving way to stick indices).  The handset also works very well.  The lollipop second hand is smooth, if not perfectly smooth. I like the Phoibos logo, so I like its placement on the dial.  Writing on the dial is kept to a minimum.

The one thing that does not work well is the date wheel.  I like its placement at the six o’clock position. When this watch was in the concept phase someone had the bright idea that the date wheel would be red like the dial.  So far, so good. I like that little touch.  Then the design geniuses decided that red lettering on the red wheel would be distinctive.  I can’t believe that they let that go to production.  For a person of a certain age, or for anyone without better than average short-range vision the date is unreadable.  I had to use magnification on my phone camera just to set it.  It has a quick set feature, but why bother? The red date is a swing and miss.

Another reason why I chose it over the Kamasu was the size.  The case is 39mm with a lug to lug of 45mm.  I have a perfectly sized wrist™ (6.75mm) and 40mm cases are about my outer limit. It sits comfortably on my wrist.  I had to remove three links on the bracelet (always three for me). The bracelet has a signed clasp and is comfortable. I am more of a strap guy, but I wanted a bracelet for summer activities.  I am not worried about scratches.  The lug width is 20mm if you want to change it for a silicone strap.  As you would expect, it has a screw down signed crown.  It hacks (a feature that I do not care about). The three positions will take some getting used to, my only diver now is a vintage Vostok which is more intuitive.

It has a NH35 movement that has been accurate as long as I have owned it. It is the standard microbrand movement and makes the watch into a thic boi.  I was surprised how thick.  At 13.5mm this is easily the thickest watch that I own. I own a 1980’s Poljot automatic with the same case dimensions that is at least 3mm shorter.  Zelos changed movements to obtain a thinner profile.  Spinnaker went in the opposite direction. I am always cleaning door jamb paint off of my acrylic crystals (I keep Polywatch in my desk for just this purpose). I am worried that it will knock into things.  So far, I have only hit the edge of a building downtown while turning a corner. (In my defense, who could have seen that office building, it has only been there for a 100 years.)

Do you care about lume? I don’t. This easily has the best lume that I have ever owned. It has fifteen layers of Super LumiNova BGW9 on the hands, indices, and bezel number markings. The bezel is unidirectional and a bit stiff. I expected it to have resistance but it fights me a bit.  I use a bezel for exactly nothing.  I may never touch it again.

I am just a few days into this watch. It is heavy and thick.  It is very different from what I normally wear and any perceived problems with the watch may just be problems with me. It is hard to move so radically from small to large. Oh, but the red. Whatever quibbles I may have disappear when I see that dial.

Great review! Phoibos is a microbrand that is on my radar, but I just haven't gone ahead and pulled the trigger on one yet. Personally, I blame Marc! Always with the new Islanders! 😂

The Phoibos I have been looking at is the Nebula, although I am also looking really hard at the new Narwhal. Phoibos is one of the microbrands using the new Miyota 9000 series movements in some of their models and keeping the prices fairly reasonable. What will probably happen is that Marc will release his diver with a Miyota 9015 and Phoibos will get pushed back again. 🤣 Nevertheless, your review has inspired me to take a look at them again. 👍

Yes, I love the Phoibos I have which is the black Wavemaster.  Fantastic specs at an amazing price.  I was so impressed I just recently bought my wife the new Phoibos Sea Nymph for her birthday and it did not disappoint, it's a beautiful watch with one of the best dials I have ever seen.  I will be pulling the trigger on a Leviathan if and when they are available again and also an abalone dial Wavemaster too when available.

Great review your posts are always fun to read. I've noticed that smaller brands struggle with clasps how does it feel?

Red suits your feisty personality (from what I’ve gathered here) more than blue, in my opinion. Great looking watch, congrats 👏

Red suits your feisty personality (from what I’ve gathered here) more than blue, in my opinion. Great looking watch, congrats 👏

Yes, I am a firecracker, a spicy tamale one might say. Thx.

Great review your posts are always fun to read. I've noticed that smaller brands struggle with clasps how does it feel?

I am not terribly particular about clasps, or bracelets generally.  It has micro-adjust holes, which is a plus, but I am not utilizing them. I like the feel.

I strike the perfect balance between the willowy wisp and the corpulent carb-loader.

(I have actually broken my left wrist twice in my life in non-watch related accidents.)

Could get a job as a pipe cleaner!

I strike the perfect balance between the willowy wisp and the corpulent carb-loader.

(I have actually broken my left wrist twice in my life in non-watch related accidents.)

Ouch! Glad to hear they were non watch related!

As always, a pleasure to read your words and perspective. Nice to have company in the cheap realm too. Kraken watch!

Great review! Thanks for sharing. I am now checking this watch out

Great review, thanks. Personally I’m a fan of divers, but I get where you’re coming from. I had an SKX for about 29 minutes when I smacked it against a stone wall putting a small chip in the sapphire. I’ve done better since, live and learn.  And I’d like to point out that your second and third negatives are kind of the same thing.  Because it’s thick it’s easy to strike. So maybe it’s a little better than you think if you only have two objections. Enjoy.

Very nice, and thank you for taking the time to write and post this.  I was thinking maybe I would try the Phobios, however, it won't go over well with my 8" wrists.  I can do a 40mm dress watch on occasion but for a diver I need something larger.  I am jealous you can rock all of those fancy vintage watches in the smaller sizes, I love them all (and own a few) but they just look ridiculous on a large wrist.