In Praise of Generic Swiss (Pt. 2) 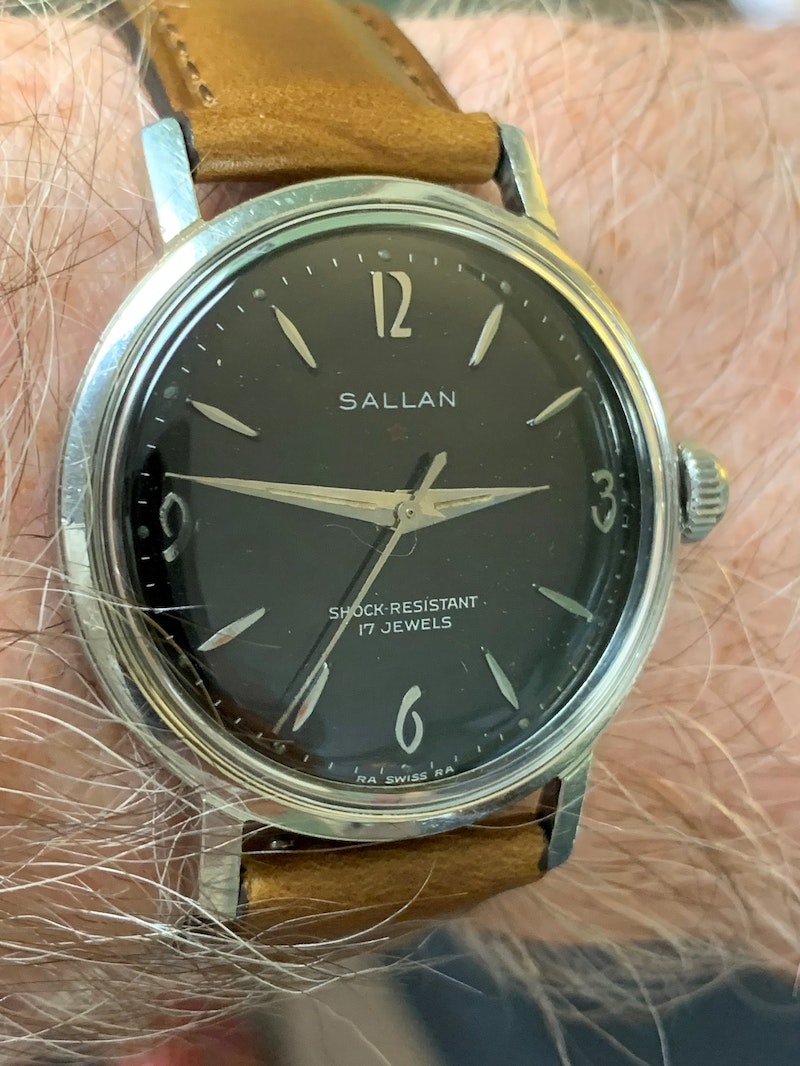 I posted a picture of this awhile back and asked if anyone had every heard of this brand.  Apparently, the answer was "no." I can't expect too many people to know or care about random old watches.

I think that it cleaned up pretty well. No, I am not concerned with the "RA" meaning that radium was applied to the dial. I don't plan on ingesting any part of the dial and the application of lume looks minimal. The application of radium tells me that this watch was produced before 1968, but I knew that just from looking at it.

The general design trend in watches was towards minimalism until the late 1960's and then there was an explosion of different looks and styles. This is a transitional piece towards optimal minimalism.  Round watch dials began to lose numerals at every index in the early 1950's.  The usual pattern was 10-12-2-4-6-8 with odd numerals omitted. In the late 1950's the same watches switched to 9-12-3-6. Eventually, watches went just 12-6, 12, and then no numerals. Hamilton and Eterna were early trendsetters, most others followed.

The style of the numerals is the same, but the dial is pressed.  The numeral and indices are all of one piece with the dial. Pressed dials almost always put a watch in the mid-1950's. (This was a modestly priced Sellita, the same Sellita that continues to make great movements today.)

Popping the back of the Sallan reveals this:

That gives me information that I can plug in here: https://www.mikrolisk.de/show.php?site=280 and here: http://www.ranfft.de/cgi-bin/bidfun-db.cgi?10&ranfft&2&2uswk&Standard_1686

Avalon Watch Company was a brand of the Banner Watch Company that was first registered in Switzerland in 1926 and was set up to import watches through New York by 1948.  The movement was a Standard 1686 which was based on the A. Schild 1686.  It is not a bad movement, but not top of the line. The movement was manufactured about 1960, give or take a little bit.  That matches with the dial. That make this watch 62 years old.

So, what about the Sallan name? That's where the ole' internet comes in. In post-war America there was a huge demand for wrist watches. The American watch industry had almost completely shifted its production to wartime machinery (Elgin's and Waltham's industrial divisions still exist today, long after they made their last watch.) There was an influx of Swiss watches and components to meet that demand.  This was the last major era where jewelry stores cased and branded their own watches (Zales' would be the last to do so.) Here is a picture of Sallan's as it once existed in Detroit, MI:

Sallan's had a house brand, of decent quality, when the customer would not reach for the high end. And now I own one. And it looks pretty good.

This is what I get out of this hobby.  It is about the story of the watch. I can only save so many.  I wish that you would save a few too. Here is another:

A new crystal makes all the difference.

Interesting old watches are everywhere. Good, dependable Swiss movements can be found at every estate sale. Go rescue one.

I admit, I am deeply envious of your deep knowledge base of vintage watches.  Having tried this three times in the past and the result being three duds, I am predisposed to staying in my lane of newer and neovintage watches.

That said, perhaps it is time to step back into the pool again.  There's a lovely Elgin on eBay that looks like a worthy project.

Fascinating! So often trend turns to tradition…and then is lost like fallen trampled leaves in autumn.

Fabulous info @Aurelian , thanks for sharing! And great looking watch too

I love the history that you post about your watches & their makers. Thank you. Fantastic looking watch

Your passion for unknown vintage is infectious. I commend you for knowing precisely what you want from this hobby. My recent policy has been "Does it look old and still tick? If so, buy"

I spend a ridiculous amount of time looking at vintage watches on eBay.  As yet I’ve only “saved” one old watch, and that came from a fellow Cruncher, but rest assured I’ll be getting more.

I’m not good at putting it into words, but I love old watches. Watches sort of embody the time from which they come, and I love that. No part of me wants to go back in time to the 30s or 50s, but it’s nice to feel that connection through watches.

Thanks for sharing. That was a wonderful story about a watch I know nothing about. 🍾

Really cool story and really cool watch. Are you changing your name to MarieCurie before or after the Geiger Counter test?

Beautiful watches.  What were your parameters when you bought these? Were you searching for these brands, this age, etc.? How often do you get a dud when you buy an older watch?

Bravo! This is what makes being a member of WatchCrunch worthwhile.

Thank you for the history and the willingness to take the time to share with us something that would be very difficult to uncover without your passion and dedication.

And on top of that what gorgeous watches to see - the dial on that Altair is truly beautiful.

Before you posted the pictures I had never encountered this brand. I suspect that they were not marketed to the United States market.

A brief trip through the internet lets me know that they founded in Tramelan in 1907 (or 1903 according to some sources) and were a brand of Beguelin & Cie. They exist in some form today, although I don't know if there is an ownership through line to the original company.

Folks who are better with movements can tell you more about that automatic. The more complicated the movement the less that I know.

Thanks @Aurelian, that‘s what we found on the internet as well. We couldn’t find any information on the watch, nobody remembered anything, and we haven’t been able to find a similar model of  online, we’ll keep looking.