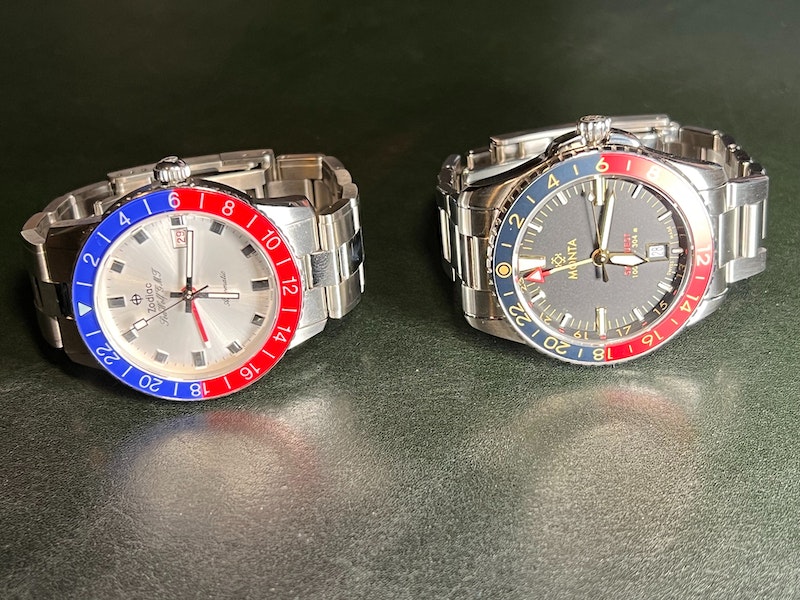 This is a cautionary tale about the risks of having eBay alerts.

I have been a big fan of Monta and specifically the Skyquest for some time. I never got around to picking one up because the basic guilt colorway felt too close aesthetically to the OG BB58. However, when they released a limited batch of 50 Pepsi configurations, they had my attention. Alas, I was not paying attention and those 50 sold out quickly. A few months later, this April I believe, they dropped the beautiful opalin version, again in 50 pieces. I had the opportunity to originally buy it, but hesitated and it was gone. My main source of hesitance was I already had the Zodiac SSW, Topper edition and I knew if I bought the Monta, I would have to get rid of the Zodiac on principle. Instantly regrettable call on my part.

Fast forward many months, and many posts, I decided to wait for the new Skyquest to drop as Monta promised something great. Well, some may like it, but to me, the new version feels like a watered-down version of the original cutting out the cool rehaut and stepped up hand. Seemed like an obvious cost cutting move that stripped the originality of the original. It was an EZPass for me and a lot of folks as they still have plenty of the new limited versions available.

That lead me to setting up alerts in all the usual places to find one of the original, which only being 50 of each was tough. All posted and were sold quickly, largely at or very close to MSRP.  Then out of the blue last Friday, notification of a new listing. Like new version, box, papers, with no reserve starting at $400 and a buy it now for $1000.  I could not click that button fast enough. I was worried something could be off given the price, but the seller has all kinds of watches and this seemed outside of their normal wheelhouse. Watch arrived in near-mint condition and with very little winding was +5s on the timegrapher.

So how does it compare to the Zodiac? Here are my initial impressons:

Fit finish: Monta
Like most Monta watches, the polishing rivals watches costing much more. The dial also has more that goes into it.

Build quality: Monta
The Zodiac has a plastic movement holder and as a result feels lighter. The quality of the metal also goes to Monta.

Bracelet & Clasp: Monta
This should be a no-brainer, Monta is one of the few watches under $2500 with a high-quality clasp with solid clicks. This is the newer glide lock system and works great. Also, the pin and collars on the Zodiac make the bracelet instantly awful

Bezel: Personal preference
Both are cool to be honest, but the Monta does have what feels like twice the clicks.

Movement: Monta
Sellita over SoProd all day long and better finishing. Did I mention the plastic in the Zodiac?

These watches are close MSRP-wise, but there feels like $1000 difference between the two. I do not dislike the Zodiac (except the bracelet) by any stretch, but Monta simply is playing on a different level.

I will take better photos when I get a chance, but figured I would share some initial impressions.

Very nice! I've read so much praise about Monta and always wanted a Monta Noble myself. Not sure I could ever get used to the bent GMT hand on this one but I certainly see some of the appeal over the newer model.

Very nice! I've read so much praise about Monta and always wanted a Monta Noble myself. Not sure I could ever get used to the bent GMT hand on this one but I certainly see some of the appeal over the newer model.

The Noble was the only Monta I handled prior to this one. I have been tempted many times buy the green one. The GMT hand is not for everyone, but it adds character.

Oh nice find.  I'm looking for a Skyquest GMT as well, but not at that price!  👌

I truly does look and feel trice the price land sadly, I paid $400 less than the Zodiac. I think it speaks to the conversations we have about the “value” of brands.

Great watches!  I’ve been reading & learning more and more about Monta and I’m so impressed with their level of fit & finish for the price.  I think both Monta and Zodiac are  “watch geek” and ”if you know you know” type of watch brands

Watch enthusiast who insists on the next watch being the last.

AllTheWatches · 1 month ago
What did I do!? And other thoughts from Day One of Wind-up.