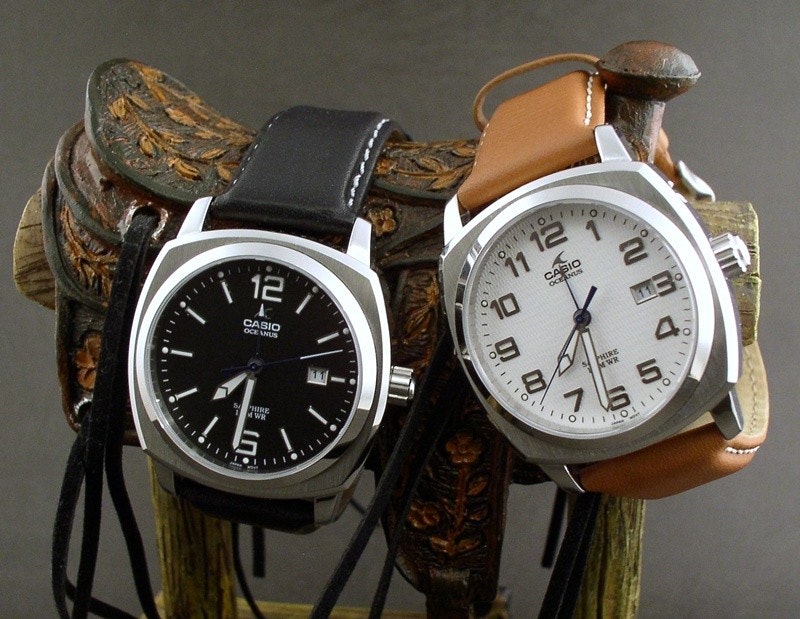 I still think this this pair of watches was an unbelievable budget steal over a couple of months, back in 2009, when I got them.

These were the first in the Oceanus series, so far as I understand (anyone, please correct me if I'm wrong) and I think they offered a very competitive deal even at full retail.

...another shot of the black, as it arrived.

I gave the white one to a friend, and still have the black on the Watchadoo

First off, if those watches arrived on a tiny saddle, I'd love to see the tiny horse.  Also, they were the steal of the century.

Second, whatever size horse they arrived on, which one cost more?

They're both watches that can be versatile with strap changes/styles. And easily tough enough for a daily wearer--but I baby mine 😉

Always have a soft spot for this kind of cushion case!

Sorry - can't wear a watch with "anus" in the name 😉 (alright I lifted that from Jody of JOMW).

Hot damn. Now I'm wondering how the heck is the retailer is even making bank for the pair. $100 for both watches? Lucky you.

Wow, those are really nice pieces, and a steal for what you paid. The added bracelets/straps make a huge difference too!

By far the best versions in this line. Wish they would be reissued

By far the best versions in this line. Wish they would be reissued

I've said this before, about different watches: I think sometimes companies give up on designs before they have time to catch on. This edition is just one--but a very good--example.