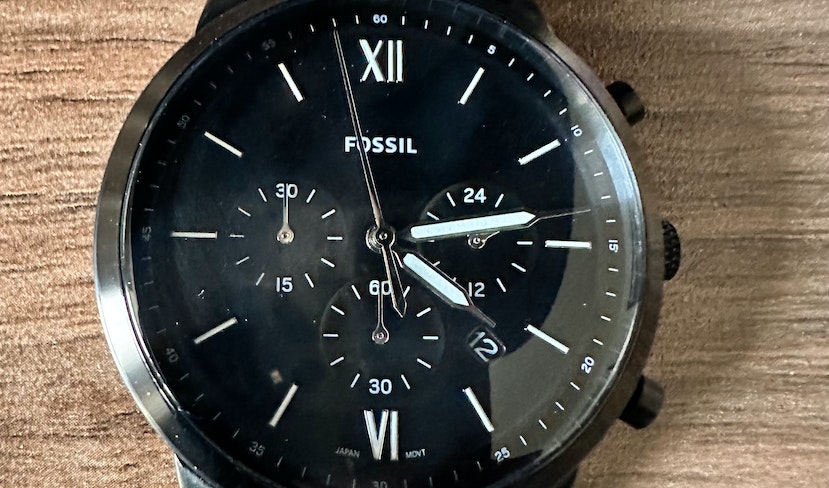 Prelude: Last week I reviewed the Stauer “Daily Chronograph” and this week it’s a Fossil Chronograph. Why doesn’t he review something good, you may be thinking. That’s because it’s more fun to crap on something than it is to praise something. I think Gandhi said that.

What I’m reviewing this week is the Fossil Neutra Chronograph. Most people are familiar with Fossil. It’s the watch that you saved your allowance for in middle school because it was an “adult watch” that you could buy at the mall. And buying it would solidify your chances of going to second base with that cute girl in your social studies class. Of course this never happened and the watch sat on the upper shelf in your closet until you got your first apartment with the guy you work with at Pizza Hut. Then, years later, your mom would find it along with a stack of Maxim magazines that “must have gotten wet somehow”. When she asks if you want it, you say no and she ends up selling it at a garage sale for $3.00. This is the legacy of Fossil watches. It’s also the legacy of Movado watches but for rich kids.

Now to the Neutra Chronograph. I’d like to give Fossil the benefit of the doubt and say this watch was named after legendary Austrian architect Richard Neutra. You’re familiar with Neutra’s work if you’ve ever seen homes at the base of the Hollywood Hills or have played GTA5.  But I think the name is more obvious than that. Neutra = Neutral. There’s nothing special about this watch. The black on black face and case combo, the silver hour markers and even the strap screams “I’m a watch”!

They did put a little effort into it with the “classy” Roman numerals at twelve and six. And the date between four and five instead of the typical three. The case itself is kind of nice. It has some heft to it and it’s slim and sleek, reminiscent of an early iPhone. Also, unlike last week’s watch, the chronograph actually works! It also keeps perfect time. Which, at the end of the day, is all a watch is really supposed to do.

The Fossil Neutra Chronograph isn’t very stylish but it is a decent watch. It’s nowhere near being in my regular rotation even though last week’s Stauer is. And that thing barely tells time. I guess that says a lot about me in the end. Form over function? Yes, I’m shallow like that.

If you want to check it out, here’s a link. But let me warn you, that girl in your social studies class isn’t going to care. ISN’T THAT RIGHT MEGAN?!

My god, man! How Hodinkee has not already snatched up your watch reviewing talent is beyond me.

My god, man! How Hodinkee has not already snatched up your watch reviewing talent is beyond me.

Wow! Thanks a lot!

BTW, I had to look up Hodinkee.

It does appear that the designer(s) put minimal effort into the dial.  I have a Fossil quartz chronograph that my son bought years ago and lost interest in, and I futzed with the movement until the chrono second hand no longer returned to zero when reset. Nonetheless, the chrono continued to function well for timing my customer visits until it failed completely after a few months.  My fiddling with it may have shortened its life, but I suspect that the chrono mechanism is not designed for longevity in regular use.

Wow! Thanks a lot!

BTW, I had to look up Hodinkee.

You were blessed with innocence by the spring and quartz in the sky to not have heard about Hodinkee up until now.

Fossil still holds a special place in my heart for this exact reason. There will be no Fossil slander coming from me.

My name is John. I live in Pilot Point, TX. I started collecting in spring of ‘22. I don’t have a very high-end collection but hopefully it’s an interesting one. Wolf Pack 4 Life.

64spoons · 2 hrs ago
Timex x Todd Snyder - It looks like a rotary phone!